A look at what the candidates are doing and saying as Michigan’s March 8 primary approaches. 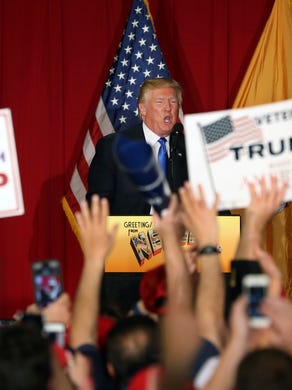 Republican presidential candidate Donald Trump, left, stands with New Jersey Gov. Chris Christie at a campaign event Thursday, May 19, 2016, in Lawrenceville, N.J. The appearance with New Jersey Governor Chris Christie is a $200 per head event with proceeds going towards helping Christie, a Trump ally, pay off debt from his own presidential campaign. Mel Evans, AP
Fullscreen

Enid Pensack, of Pennington, N.J., holds a sign as she stands with others outside an event where Republican presidential candidate, Donald Trump and New Jersey Gov. Chris Christie were to appear Thursday, May 19, 2016, in Lawrenceville, N.J. Mel Evans, AP
Fullscreen 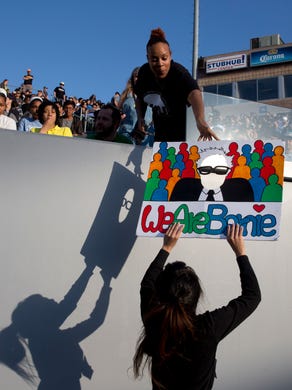 Hsingii Bird, bottom, gets her sign back from a supporter at a campaign rally for Democratic presidential candidate Sen. Bernie Sanders, I-Vt., Tuesday, May 17, 2016, in Carson, Calif. Jae C. Hong, AP
Fullscreen 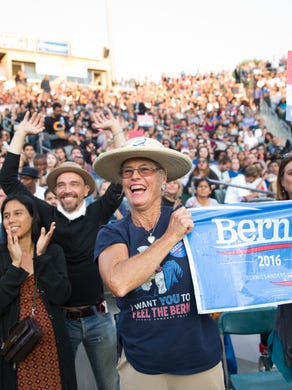 Democratic presidential candidate Hillary Clinton greets the crowd at a campaign rally at La Gala May 16, 2016, in Bowling Green, Kentucky. Clinton is barnstorming ahead of the state's Tuesday primary, trying to improve her standing among working-class men as she pivots toward a general election showdown with Donald Trump. Michael Mathes, Getty Images
Fullscreen

Supporters cheer as Democratic presidential candidate Hillary Clinton speaks at a get out the vote event at Transylvania University in Lexington, Ky., Monday, May 16, 2016. Andrew Harnik, AP
Fullscreen

An immigrant receives assistance with her U.S. citizenship application at a Citizenship Now! event held by City University of New York, on May 14, 2016 in New York City. Many legal immigrants are rushing to process their applications ahead of the upcoming U.S. presidential election in November. Campaign rhetoric of presumptive Republican candidate Donald Trump, and potential changes to the citizenship application process after the election has caused anxiety in the immigrant community. John Moore, Getty Images
Fullscreen

Volunteers assist immigrants with their U.S. citizenship applications at a Citizenship Now! event held by City University of New York (CUNY), on May 14, 2016 in New York City. Many legal immigrants are rushing to process their applications ahead of the upcoming U.S. Presidential election in November. Anti-immigrant rhetoric by presumptive Republican Presidential candidate Donald Trump and potential changes to the citizenship application process after the election has caused anxiety in the immigrant community ahead of the vote. (Photo by John Moore/Getty Images) John Moore, Getty Images
Fullscreen

Bill Clinton, left, is introduced by Congressman Bill Pascrell at Passaic County College in Paterson, N.J on Friday, May 13, 2016. The former president is campaigning for his wife, Hillary Clinton. Chris Pedota, AP
Fullscreen

Republican presidential candidate Donald Trump waves as he arrives for a meeting with House Speaker Paul Ryan of Wis., at the Republican National Committee Headquarters on Capitol Hill in Washington, Thursday, May 12, 2016. Trump and Ryan are sitting down face-to-face for the first time, a week after Ryan stunned Republicans by refusing to back the mercurial billionaire for president. Andrew Harnik, AP
Fullscreen

Speaker of the House Paul Ryan checks his watch at his weekly press conference at the U.S. Capitol following his meeting with Republican presidential candidate Donald Trump May 12, 2016 in Washington, D.C. Last week Ryan indicated he was not yet ready to support Trump as the candidate of the Republican party, but after the meeting struck a more conciliatory note, while still withholding an endorsement. Win McNamee, Getty Images
Fullscreen

Sen. Charles Schumer, D-N.Y., holds a news conference following meetings between Republican presidential candidate Donald Trump and GOP congressional leadership at the U.S. Capitol May 12, 2016 in Washington, D.C. Senate Democrats pointed to policies they say that Trump and Republicans in Congress agree on and said they were both operating from the same textbook. Chip Somodevilla, Getty Images
Fullscreen

Capitol Police move a demonstrator to outside the Republican National Committee Headquarters on Capitol Hill in Washington, Thursday, May 12, 2016, during a meeting between Republican presidential candidate Donald Trump and House Speaker Paul Ryan of Wisconsin. Andrew Harnik, AP
Fullscreen

Democratic presidential front-runner Hillary Clinton speaks with a coalition of HIV/AIDS activists at her Brooklyn campaign Headquarters on May 12, 2016 in New York City. Clinton spoke to the group about her commitment to ending AIDS as a global epidemic. Spencer Platt, Getty Images
Fullscreen 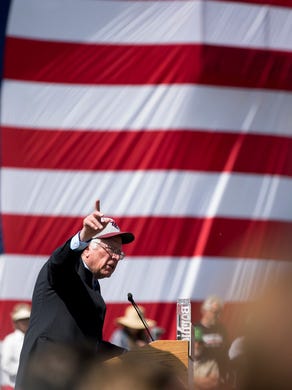 Democratic presidential candidate Bernie Sanders speaks at a campaign stop in Rapid City, S.D., on Thursday, May 12, 2016. The Vermont senator spoke to hundreds of people on the Pine Ridge Indian Reservation and thousands of people in Rapid City Thursday during a campaign swing through South Dakota. He was wearing a local little league baseball hat. Kristina Barker, AP
Fullscreen

A protester is removed from a rally for Republican presidential candidate Donald Trump in Spokane, Wash., Saturday, May 7, 2016. Ted S. Warren, AP
Fullscreen

“A con artist is about to take over the Republican Party and the conservative movement, and we have to put a stop to it.”

“Open up our libel laws so when they write purposely negative and horrible and false articles, we can sue them and win lots of money.” He adds, “If I become president, oh, do they have problems.”

“I know exactly when Ted’s going to drop out of the race. March 12th. That’s Canadian week at Myrtle Beach, when all of our Canadian friends get 10 percent off,”

Carson says during an appearance Friday at a conference of religious broadcasters in Nashville that if Trump were to surround himself with the right advisers, “it might not be the total disaster that we anticipate.”

“I served alongside John Kasich in Congress when he was Chairman of the Budget Committee and led the way to balance the federal budget," the former Illinois lawmaker said in a statement released through Kasich's campaign. — Politico

“I think it does take me a little bit longer to get into the rhythm of campaigning. We hit our stride in Nevada. Our message of breaking all barriers is really beginning to take hold. I really felt we were on an upward trajectory.”

Before a rally in Hibbing, Minnesota, on Friday morning, Sanders met with a group of about a dozen Native American tribal council members. The Vermont senator said that the way Native Americans have been treated is a “disgrace” and that he has a track record of support for their community.