New York City has seen a 20 percent increase in stabbings this year compared with last. 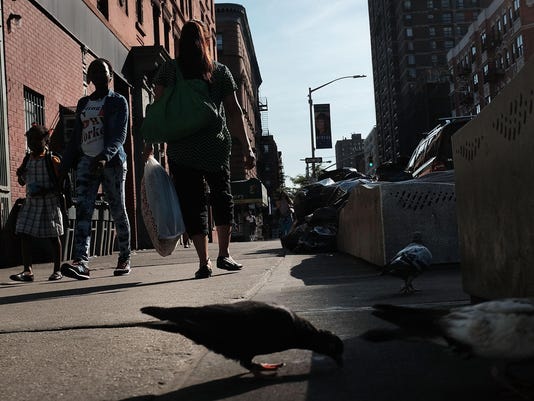 People are viewed in East Harlem on September 16, 2015 in New York City. New York City has seen a 20 percent increase in stabbings this year compared with last, and police say they don’t understand why it’s happening or what to do about it.(Photo: Spencer Platt / Getty Images file photo)

New York City has seen a 20 percent increase in stabbings this year compared with last, and police say they don’t understand why it’s happening or what to do about it.

While most of the attacks are part of domestic disputes in homes, random assaults without apparent motives are on the rise. As of March 13, police recorded 809 incidents, up from 673 last year. So far there have been 20 attacks in the subways — nine more than last year — including a fatal encounter Wednesday in a Harlem station.

Kitchen knives, screw drivers, box cutters and machetes are among the weapons used. The stabbings have overshadowed a promising trend showing a 23 percent decline in homicides and a 12 percent drop in shootings compared to last year. Tabloids reporting a stabbing almost every day in the most populous U.S. city have heightened the police department’s concern about their impact on the public.

“The numbers are relatively very small, but stabbings are occurring all over the city,”Robert Boyce, the department’s chief of detectives, said in a telephone interview. “The random nature of some of these crimes affect everyone because it’s disturbing when it happens to just regular folks.”

In January, a surveillance camera captured video of a man striding beside a 24-year-old woman on a sidewalk in Manhattan’s Chelsea neighborhood and, without warning, slicing her face twice. In another attack that month,a 71-year-old woman required 30 stitches after a man with a razor opened a four-inch gash on her left cheek as she sat on a subway train in lower Manhattan. On March 10, a man rushed up from behind and slashed a 53-year-old woman’s neck on a residential street in Brooklyn.

Thursday, police searched for a suspect who stabbed to death a 53-year-old man in the East Harlem subway station the day before who was illegally selling MetroCard swipes for access to the trains.

News coverage of the spate of stabbings was a factor in leading the department this year to change its record-keeping to list each attack’s circumstances and attempt to ascribe a suspect’s motive or mental state, Boyce said.

The records reveal the attacks are most frequent in parts of the Bronx and Queens. That information isn’t very helpful because these areas show higher-than-average incidences of all crimes, Boyce said. And the unpredictability of most of the attacks make them much more difficult to police than a knife-wielding repeat offender, for whom investigators could begin to see patterns of behavior, he added.

While the news coverage may have increased the department’s focus on the stabbings, the stories, which have sometimes appeared on the front pages, may have encouraged others to commit such acts, said David Kennedy, a criminologist who specializes in violence and gang behavior at City University of New York’s John Jay College of Criminal Justice.

“There’s been a lot of examples of mini-epidemics of so-called copycat behavior, where press attention makes incidents like suicides and school and spree shootings contagious,” Kennedy said. “As I watch the coverage unfold my hope is this attention isn’t causing more of them.”

The stabbings may be symptomatic of a breakdown in civility in areas of the city where police have scaled down their enforcement of minor offenses, said Heather Mac Donald, a research fellow specializing in crime at the Manhattan Institute, a policy research organization that has been critical of Mayor Bill de Blasio’s initiatives to reduce police stop-and-frisk tactics in minority neighborhoods.

“The same strategies aimed at getting guns off the streets, including stop-and-frisk, should apply to knives,” she said. “The public feels like the streets are getting out of control, and it’s hard to talk to anyone in the city who doesn’t feel there’s been an increase in street homelessness, litter and a general sense of order breaking down.”

Unlike guns, which must be registered and may be traced through ballistics evidence, knives can be household items and are legal to carry, with the exception of knives longer than four inches, or gravity-opened weapons such as switchblades.

“These things are unfortunate, they occur, but the actual reality is that crime is continuing to go down in the city,” Police Commissioner Bill Bratton said during a Feb. 18 interview on WOR radio.

Such gains have made residents throughout the city feel safer, yet the stabbings are reminiscent of the sixties, seventies and eighties — decades when residents considered some streets dangerous at night, said Alvin Berk, chairman of the local community board in Flatbush, Brooklyn, where the 53-year-old woman was stabbed in the neck as she walked down the street while talking on her mobile phone.

“The scariest part of this is its apparent random quality; the unpredictability of it,” Berk said. “It’s a lot easier to handle something like this when there’s an explanation for it, and you can understand it.”

Of the hundreds of knife attacks this year, police consider less than 20 unprovoked, Boyce said. Of them, as many as five may have involved gangs, two were robberies and 11 were spats that escalated into violence.

“Someone bumps up against another in a crowded subway, or someone gives another an unfriendly stare,” Boyce said. “Eye contact is bad on the subway. Try to avoid it and just go about your business.”