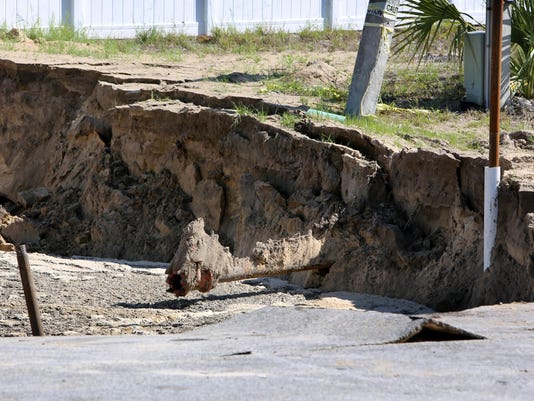 A water pipe continues to leak water within a 60-foot-wide sinkhole which opened on Wednesday, March 30, 2016, in a Pinellas County utilities easement bordering the south side of the Tarpon Shores Mobile Home Park in Tarpon Springs, Fla. Crews evacuated a half dozen residents whose homes were in close proximity to the sinkhole, according to authorities at the scene. (Douglas R. Clifford/Tampa Bay Times via AP)(Photo: Douglas R. Clifford / AP)

Tarpon Springs, Fla. — About 20 residents in six homes at a mobile home park along Florida’s Gulf Coast were evacuated Wednesday after a 60-foot-wide, 35-foot-deep hole opened in the ground.

The residents at the Tarpon Shores Mobile Home Park in Tarpon Springs were taken to the park’s nearby clubhouse as a precaution while officials took a closer look at the hole, said city spokeswoman Judy Staley.

The Tampa Bay Times reported that authorities were investigating if a water line break was responsible or if the deep hole was a naturally occurring sinkhole.

Dave Haver was in his backyard workshop when the hole opened up. He said he heard crunching and cracking, and about 20 feet of his white fence disappeared.

Haver and his wife, Becky, are snowbirds from Ohio and they had planned to return this weekend. But they said they will likely head back to Ohio immediately since the opening of the hole will prevent them from using their home for the time being.

Police knocked on their front door and told them “hurry up and get out,” right after they were able to grab clothes, medications, paper work and other necessities, they said.

“We were getting ready to leave, but we didn’t expect to leave under these terms,” Becky Haver said. “It isn’t how I wanted to end my vacation, that’s for sure.”

Florida is highly prone to sinkholes because there are underground caverns of limestone, a porous rock that easily dissolves in water.

Major Jeff Young, a Tarpon Springs police spokesman, said an existing sinkhole opened up in the same location six weeks ago. He said the hole broke sewer and water lines.

Several other sinkholes have opened up around the mobile home park in the past, Staley said.

In March 2013, a man in nearby Seffner disappeared when a sinkhole opened up under his bedroom. His body was never recovered.