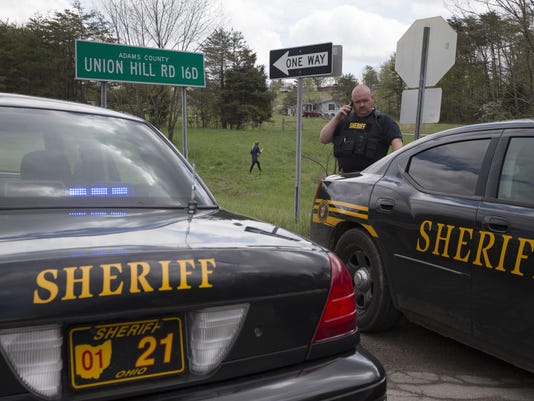 Authorities create a perimeter near a crime scene on Union Hill Road, April 22, 2016, in Pike County, Ohio. Shootings with multiple fatalities were reported along a road in rural Ohio on Friday morning, but details on the number of deaths and the whereabouts of the suspect or suspects weren't immediately clear.(Photo: John Minchillo / AP)

Piketon, Ohio — Residents of the rural southern Ohio community of Piketon are rattled by a rare major crime that took the lives of eight members of a tight-knit family known in the area as hard workers.

Authorities were still trying Sunday to find out who targeted the seven adults and teenage boy and why. Their bodies were found Friday at four different homes near Piketon, about 60 miles south of Columbus.

Kayla Hay said she got to know one of the victims, 37-year-old Dana Rhoden, when they both worked as nurse’s aides at a nursing home. Hay said she was shocked and saddened when she heard Rhoden was among those killed.

“I’ve never heard her say anything about being frightened or concerned about anything bad happening,” said Hay, who described Rhoden as outgoing and friendly.

“She was always in a good mood and was very bright, both in her personality and her intelligence,” Hay said.

Authorities said none of the injuries appeared self-inflicted. A search for the killer or killers continued Saturday, and investigators said they had interviewed more than 30 people.

Robin Waddell, who owns the Big Bear Lake Family Resort just south of Piketon, said Christopher Rhoden often did work for him as a carpenter and helped out with his excavation business. He said Rhoden was a nice guy whose kids sometimes visited him while he was working.

“It’s a large family,” Waddell said. “There’s a lot of them and they’ve been in this community for generations. So this is affecting a lot of people.”

Kendra Jordan, 20, said she often worked nights at a nursing home with Hanna Rhoden and described her as outgoing, funny and always smiling.

“If you were having a bad day, she’d be the first one to come up to you to question you about what was going on,” Jordan said. “She was amazing.”

Todd Beekman, who owns an outdoors shop a few miles from the crime scenes, said at least one customer came in to stock up on ammunition after hearing about the shootings. But Beekman and others hanging out there midday Saturday said they weren’t concerned for their own safety because it’s an area where residents know and look out for each other.

“The word spread pretty fast, as it does in any rural area,” Beekman said. “Everybody’s kind of their own brother’s keeper down here.”

Phil Fulton, the pastor of Union Hill Church up the road from where some of the victims were found, described the Rhoden family as close-knit and hardworking. He said they were previously part of his congregation, though not recently. He said a crisis resource team was at the church to work with the family.

“They’re not doing well with this situation at all,” Fulton said. “A tragic situation like this ...”

The exact timing of the shootings remains unclear. Authorities got the first 911 call shortly before 8 a.m. Friday; the second came several hours later from another location.

Two of the crime scenes are within walking distance of each other along a sparsely populated, winding road that leads into wooded hills from a rural highway. The third residence is more than a mile away, and the fourth home is on a different road, at least a 10-minute drive away, said the investigation’s leader, Benjamin Suver of the state Bureau of Criminal Investigations.

Authorities refused to discuss many details of the crime, including the search operations.

Officials said a Cincinnati-area businessman put up a $25,000 reward for information leading to the capture and conviction of the killer or killers.

Find Kantele Franko at http://www.twitter.com/kantele10. Her work can be found at http://bigstory.ap.org/author/kantele-franko.

Associated Press writers Ann Sanner in Columbus, Lisa Cornwell in Cincinnati, and Albert Stumm in Philadelphia contributed to this report.