Relative: 5 of 8 shot in Ohio will be buried side by side

Relative: 5 of 8 shot in Ohio will be buried side by side 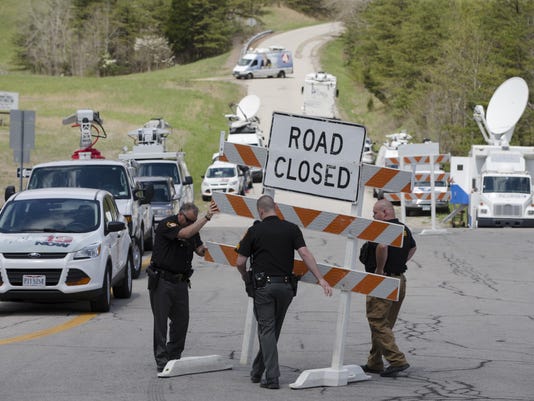 In this Friday, April 22, 2016, photo, authorities set up road blocks at the intersection of Union Hill Road and Route 32 at the perimeter of a crime scene, in Pike County, Ohio, where eight people were killed.(Photo: John Minchillo / AP)

Lucasville, Ohio — The brother of some of the eight family members found shot last week in rural southern Ohio says five victims will be buried side by side in a nearby town.

Seven adults and 16-year-old boy were found dead Friday at four properties near Piketon. Investigators have questioned more than 30 people in the case but have made no arrests.

Tony Rhoden tells The Columbus Dispatch his 73-year-old mother has been holding the grieving family together.

Rhoden lost two brothers, his former sister-in-law and a cousin in the slayings. He says the victims also included a teenage nephew who had just earned a driver’s license, a 19-year-old niece who worked at a nursing home and had a days-old newborn, and a 20-year-old nephew who loved to hunt and fish.