Feds: 2016 hurricane season in Pacific will be about average

As the El Nino pattern continues to dissipate, forecasters said La Nina will settle in as the summer gets underway

Feds: 2016 hurricane season in Pacific will be about average 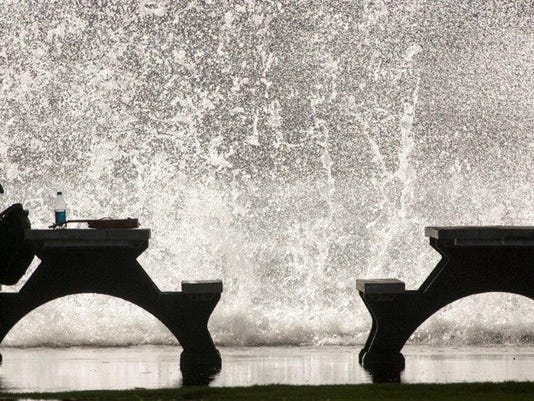 In this Aug. 31, 2015, file photo, Andy Penn, of Hilo, watches as a large wave crashes off a sea wall on Hilo Bay in Hilo, Hawaii as Hurricane Ignacio moved past the Hawaiian Islands.(Photo: Caleb Jones / AP)

Honolulu — After a record-setting hurricane season fueled by a strong El Nino in 2015, federal forecasters said Thursday the 2016 central Pacific hurricane season will likely be only slightly above average as La Nina conditions take over.

As the El Nino pattern continues to dissipate, forecasters said La Nina, or below average water temperatures around the equator, will settle in as the summer gets underway.

“There are conflicting signals for the upcoming season, giving us a little bit more uncertainty in what 2016 has in store for us,” said Chris Brenchley, a warning coordination meteorologist at the Central Pacific Hurricane Center.

While average La Nina years produce only about two and a half storms per season, he said, there has been an uptick in storms in the past several years that indicate there may be more storms this season than would normally be associated with La Nina years. He said during previous “active phases,” such as in the 1980s and early 1990s, there were about six storms per season even when La Nina patterns were active.

The 2015 season, with 15 named storms, was the most active since scientists began recording patterns in 1970. None of those storms last year caused any major damage to the Hawaiian Islands, and no storms directly hit the archipelago. In 1992 and 1994 there were 11 storms each.

Officials urged the public to take precautions and be prepared for a storm before it starts to approach the islands.

“Learn from the past and plan for the future,” Brenchley said about the upcoming season.

Forecasters also said the 2015-2016 wet season in Hawaii was the fifth driest in the past 30 years, also caused by El Nino.

Moderate drought developed in January and had impacts on agriculture and those on rain catchment systems.

Forecasters also predicted a dry summer ahead, causing some concern about brush fires and agricultural impacts in the islands.

There has already been more than twice as much land burned in 2016 than in all of 2015, said National Weather Service Senior Service Hydrologist Kevin Kodama.

“That’s something that fire folks are really concerned about for this dry season,” Kodama said.