But when she came across an unrecognizable collection made not of spray paint but substances like grease pencil and apparently left there for a century, she was stunned.

Phillips had uncovered a peculiar, almost extinct form of American hieroglyphics known as hobo graffiti, the treasure trove discovered under a nondescript, 103-year-old bridge spanning the Los Angeles River. At the time, she was researching her book, “Wallbangin’: Graffiti and Gangs in LA.”

“It was like opening a tomb that’s been closed for 80 years,” the Pitzer College professor of environmental analysis said of finding the writings and occasionally the drawings of people who once signed their names as Oakland Red, the Tucson Kid and A-No. 1.

“There’s an A-No. 1, dated 8/13/14,” she said, pointing to a scribbling during a recent visit to the bridge just around the bend from a modern-day homeless encampment. 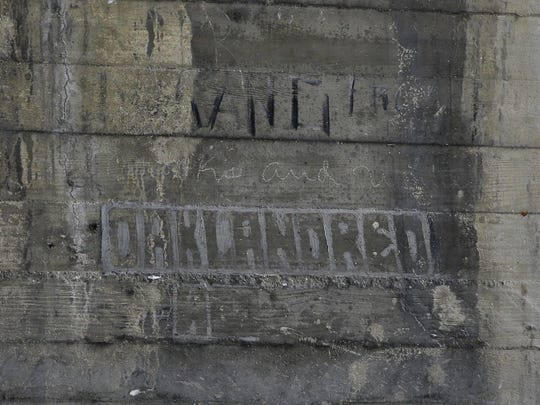 Although all but forgotten now, A-No. 1 was the moniker used by a man once arguably America’s most famous hobo, one of the many itinerant wanderers who traveled from town to town in the 19th and 20th centuries, often by freight train, in search of brief work and lasting adventure.

Upriver would have been in the direction of the city’s sprawling, wooded Griffith Park, in those days a popular jumping-off point for hobos looking for a safe, common gathering spot.

Nearby is a faded drawing of a man riding a bucking bronco that is signed and dated by the Tucson Kid, July 1, 1921.

“This is a very beautiful piece by Oakland Red here,” she points out, craning her head back to point out another work, done in grease pencil and featuring the creative use of white space and shading to give it almost a two-dimensional effect.

“That’s actually a style that graffiti writers and graphic artists use today,” adds Phillips, who is working on another book, this one on hobo graffiti.

Such markings, once found all over the country, have largely vanished in recent years, she and other experts say. Absent a few exceptions, they have been covered over by more recent, more colorful spray-painted images or eliminated entirely by time, weather or cleanup campaigns.

A-No. 1 was the moniker used by a man once arguably America's most famous hobo, one of the many itinerant wanderers who in the 19th and 20th centuries traveled from town to town, often by freight train, in search of brief work and lasting adventure. (Photo: Jae C. Hong / AP)

“A lot of the stuff I’ve documented through time has been destroyed, either by the city or by other graffiti writers, and that is just the way of graffiti,” said Phillips, whose research is being funded by a Getty Center grant.

She also is looking into ways to preserve — perhaps digitally — what’s left of the fragile markings, including some etched into concrete by spikes taken from the nearby railroad.

That the markings have survived this long has much to do with circumstances unique to Los Angeles, most notably its 51-mile, concrete-bottomed river that was lowered 25 feet after the hobo graffiti bridge was built.

The river was dug deeper and paved over to prevent another disastrous flood like the one that roared through Los Angeles during the El Nino-fueled rainy season of 1938, toppling buildings and killing scores of people.

Restructuring the river not only prevented future flooding but also put this particular bridge’s markings several stories above the river, where they were shielded from future rain, wind and sun and kept out of reach of others by a man-made, 90-degree-angled concrete riverbank that was impossible to climb.

“It’s just like a fluke down there in LA that that survived,” said Bill Daniel, whose own studies of hobo graffiti have taken him across the country, following the path of taggers whose work he’s chronicled in the publication “Mostly True: The West’s Most Popular Hobo Graffiti Magazine” and the documentary film “Who Is Bozo Texino.”

“It’s hard to find the old stuff because most older infrastructure has been torn down,” he added, noting A-No. 1’s signature was an impressive discovery. 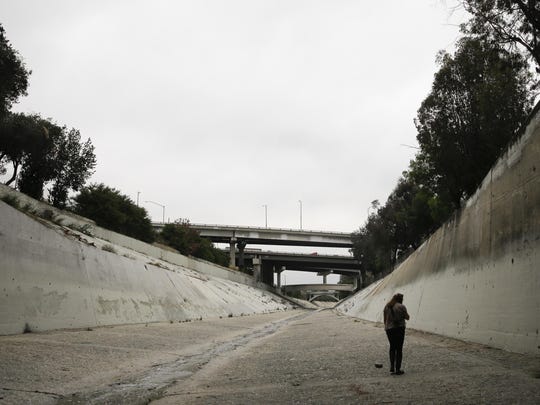 Anthropologist Susan Phillips walks along the Los Angeles River while searching for graffiti by hobos in Los Angeles. Phillips had spent a career examining the graffiti that covers urban walls, bridges and freeway overpasses. But when she came across a heretofore unrecognizable collection made not of spray paint but substances like grease pencil and apparently left there for a century, she was stunned. (Photo: Jae C. Hong / AP)

A-No. 1, whose name was Leon Ray Livingston and died in 1944, was not only a hobo but author of several books.

Phillips notes she can’t say definitively the tags attributed to him from 1914 are his, but she adds that they bear the same style as those found in the books he was writing and illustrating at the time. Still, some hobo graffiti taggers were known to appropriate each other’s monikers.

Meanwhile, she keeps researching the tags, matching up real names with the hobos’ monikers and tracking down survivors where possible.