Most of about 20,000 evacuees forced out by a wildfire have been cleared to go home 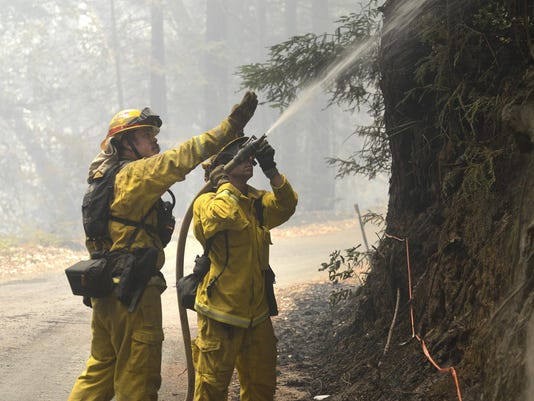 Big Sur, Calif. — California’s signature parks along the Big Sur coastline that draw thousands of daily visitors were closed Tuesday as one of the state’s two major wildfires threatened the scenic region at the height of the summer tourism season.

To the south, firefighters made progress containing a huge blaze in mountains outside Los Angeles, allowing authorities to let most of 20,000 people evacuated over the weekend to return home. In Wyoming, a large backcountry wildfire in the Shoshone National Forest put about 290 homes and guest ranches at risk.

The Los Angeles-area fire has destroyed 18 homes since it started and authorities over the weekend discovered a burned body in a car identified Tuesday as a man who refused to be evacuated.

A woman living in the house Robert Bresnick was visiting left with firefighters but he went back inside the house. The body of Bresnick, 67, was found about 20 minutes later Saturday in the car after flames tore through the area, said Los Angeles County Coroner’s Assistant Ed Winter.

The Big Sur closures were put into place for parks that draw 7,500 visitors daily from around the world for their dramatic vistas of ocean and mountains along Highway 1 near storied Monterey Bay.

The park shutdowns came as a fire that started Friday just north of Big Sur grew Tuesday to 30 square miles but was just 10 percent contained. Twenty homes have burned in the zone, residents of 300 more were ordered to evacuate and more than 2,000 firefighters were trying to douse the blaze.

“At any point in time this fire can change directions, can spread very quickly and if that happens there could be embers that fly a mile ahead of the main fire,” said Richard Cordova, a state fire captain.

Park roads, trails and camping sites in five parks and a nature reserve were closed as a safety precaution because of thick smoke causing unhealthy air quality and to keep the roads free of traffic for firefighters, said state parks spokesman Dennis Weber.

The Wyoming fire in a remote region burned nearly 11 square miles and forced the evacuations of 900 people but no homes had burned by Tuesday afternoon, authorities said.

In Southern California, the fire in rugged wilderness between the northern edge of Los Angeles and the suburban city of Santa Clarita grew to 58 1/2square miles.

But authorities said Tuesday they had managed to contain 25 percent of the area.