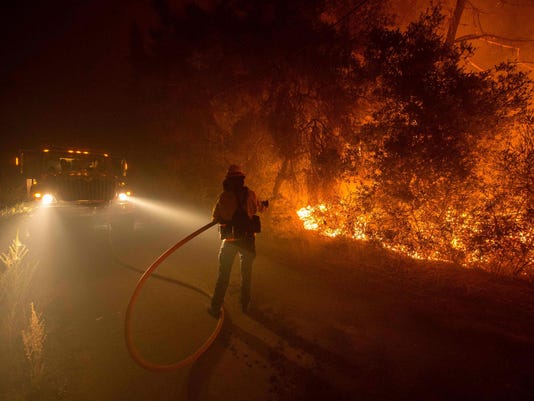 Sampson Spence of Fremont Fire douses flames as they approach a road in the Santa Cruz Mountains near Loma Prieta, California, on September 28, 2016. The Loma Fire has charred more than 2,000 acres and burned multiple structures in the area.(Photo: Josh Edelson / Getty Images)

Morgan Hill, Calif. — Remote California homes in the Santa Cruz Mountains were in the path of a growing and destructive wildfire scorching its way Wednesday through bone-dry brush and trees, officials said.

The blaze in steep terrain south of San Francisco grew overnight to more than 3.5 square miles and was just 10 percent contained.

It threatened 300 buildings, though it was not clear how many were homes or smaller structures. Evacuation orders were in place for residents of several canyons and other rugged areas.

But cooler temperatures and calmer winds were expected to help more than 1,000 firefighters working in the area following days of withering heat, said Capt. Nick Wallingford of the California Department of Forestry and Fire Protection.

“The cooling trend is very good news but there’s still a big threat,” he said. “Today we’re really going on the offensive in fighting this fire.”

One remote spot where the fire burned was 30 minutes up a winding dirt road. Another was dotted with large-scale marijuana growing operations. Firefighters could not get to one ridgetop because of downed utility lines.

The fire consumed a large home sitting on a hilltop plot and poured out thick, black smoke, while another house sat unscathed below. At least six outbuildings were also destroyed.

Norman Noble, 75, left the mountain home where he’s lived for a quarter century as flames approached and fire trucks rolled in.

“I evacuated … because I didn’t want to get in anyone’s way,” he told the San Jose Mercury News, adding that he had no idea when he might be able to go back.

Anthony Lopez returned Tuesday to check on his home, still under an evacuation order, and was overjoyed to find his dozens of marijuana plants intact and his 1972 Buick Skylark uncharred.

The fire started Monday during a heat wave that brought low humidity and temperatures in the upper 90s to much of California. The heat began easing late Tuesday, but fire risk remained extreme.

“This fire is a good reminder that even though we are approaching October, this time of year is historically when we experience the largest and most damaging wildfires,” Cal Fire spokesman Daniel Berlant said.

North of San Francisco in Sonoma County, embers from eucalyptus trees engulfed in flames floated through the air and landed on the roofs of 13 homes, destroying four houses in the small city Petaluma on Tuesday.

One woman was injured and received burn blisters on the bottom of one foot.

That fire started in grass near an off ramp of Highway 101 and was blown by the wind into parched eucalyptus trees, Holden said.

Authorities evacuated about 20 homes and shut down most of the highway’s northbound lanes for nearly two hours.