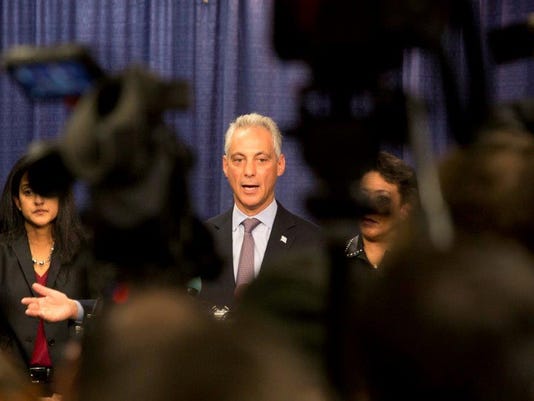 Chicago — A day after President Donald Trump declared he was ready to “send in the Feds” if Chicago can’t reduce its homicides, Mayor Rahm Emanuel warned against deploying the National Guard, saying it would hurt efforts to restore trust in the police.

Trump offered no details on what kind of federal intervention he was suggesting or if it could involve troops, but the mayor cautioned that using the military could make matters worse.

“We’re going through a process of reinvigorating community policing, building trust between the community and law enforcement,” the mayor told reporters Wednesday. Sending troops “is antithetical to the spirit of community policing.”

If the president was suggesting the use of federal troops, such a plan could face practical and constitutional obstacles. A law dating back to 1878 prohibits the deployment of federal troops to do the jobs of domestic police, with some rarely invoked exceptions.

Chicago Aldermen reacted cautiously Wednesday to Trump's promise, saying the city could use more federal money and assistance but that National Guard troops patrolling the streets would be a mistake.

South Side Alderman Pat Dowell said the city could use federal money for jobs and education programs.

"We could use some federal help. I don't think it should come in the form of troops," Dowell said. "And I'm not sure what he meant by federal help. But in my mind, he's a law-and-order president. I'm thinking he's thinking troops. So I don't necessarily think we need that, but I do think we need some help from the federal government, whether it's investing in neighborhoods, jobs, jobs over jails.

South Side Alderman Toni Foulkes said it would be a mistake to think sending National Guard units into the city's African-American neighborhoods would improve conditions in those communities, where there is already a distrust of law enforcement.

"When the National Guard gets involved, you end up with curfews, militarization of neighborhoods," said Foulkes. "And especially in places like Englewood, neighborhoods where residents already feel like there's a racial basis to some of these decisions, that will not help matters."

In his campaign, Trump talked regularly about getting tough on crime, sometimes singling out Chicago, which was in the midst of a year in which the death toll soared to 762 — the most killings in the city in nearly two decades and more than New York and Los Angeles combined.

His tweet also came less than two weeks after the Justice Department issued a scathing report on Chicago police.