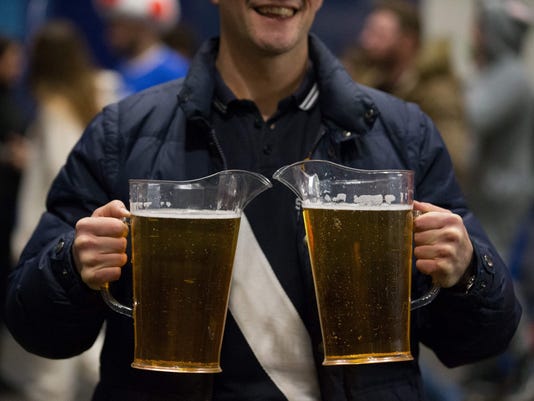 Utah could soon have the strictest DUI threshold in the nation after state lawmakers on Wednesday night voted to lower the limit for a driver’s blood-alcohol content to 0.05 percent, down from 0.08 percent.(Photo: Daniel Leal-Olivas / Getty Images file)

Salt Lake City — Utah could soon have the strictest DUI threshold in the nation after state lawmakers on Wednesday night voted to lower the limit for a driver’s blood-alcohol content to 0.05 percent, down from 0.08 percent.

The measure heads to Utah’s governor, who has said he supports the legislation.

If Republican Gov. Gary Herbert signs the bill, it would take effect Dec. 30, 2018 — an unusual effective date for Utah laws that would ensure the harsher standard is in place before alcohol-laden celebrations on New Year’s Eve.

Supporters of the legislation said it would save lives by keeping people off the road if they’ve been drinking. A mix of lawmakers, including Democrats and libertarian-leaning Republicans, opposed the measure. Some cited concerns that it could hurt tourism as the heavily Mormon state grapples with its reputation as an unfriendly place for drinkers.

The proposal would mean that a 150-pound man could get a DUI after two beers, while a 120-pound woman could get one after a single drink, according to the American Beverage Institute, a restaurant trade group that opposes the bill. A number of factors, including how much food is in someone’s stomach, could impact how much a drink will raise someone’s blood-alcohol content.

American Beverage Institute Managing Director Sarah Longwell said in a statement Wednesday night that the proposal will do little to make roads safer because more than 77 percent of alcohol-related traffic deaths in Utah come from drivers with a blood-alcohol content of 0.15 and above. “Utah legislators missed an opportunity today to target the hard-core drunk drivers who cause the vast majority of drunk driving fatalities and instead decided to criminalize perfectly responsible behavior,” Longwell said.

Lawmakers in Washington are considering lowering the limit for blood-alcohol content this year, while a similar proposal recently died in Hawaii’s Legislature.

Across the country, the blood-alcohol content limit for most drivers is 0.08, but limits vary among states for commercial drivers or drivers who have had a past DUI conviction.

Rep. Norm Thurston, R-Provo, who sponsored Utah’s measure, said it’s important because a person starts to become impaired with the first drink. He notes a number of foreign countries have blood-alcohol content thresholds at 0.05. or lower.

At a blood-alcohol content of 0.05 percent, a driver may have trouble steering and have a harder time coordinating, tracking moving objects and responding to emergencies, according to the National Highway Traffic Safety Administration.

For several years, the National Transportation Safety Board has encouraged states to drop their blood-alcohol content levels to 0.05 or even lower, though local officials have not adopted the standards, in part because of pressure from the hospitality industry.

The tougher stance on DUIs comes as Utah legislators passed changes Wednesday easing other liquor laws that deal with the preparation of alcoholic drinks in restaurants. That measure, waiting for approval from the governor, would let diners see their drinks being poured or mixed if restaurants set up child-free buffer zones around bars.