A police spokesman: The fundraiser was linked to a bank account of one of the cops involved and probe is a precaution 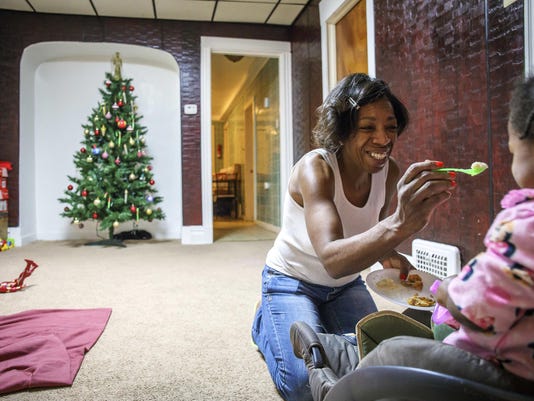 FILE - In this Tuesday, Dec. 6, 2016 file photo, Delores Anderson takes care of her three granddaughters at home in the Englewood neighborhood in Chicago. Chicago Police are investigating a sergeant who was praised for helping the three young girls found living in squalid conditions in an abandoned building because he helped raise money for the children. Sgt. Charles Artz helped set up an online fundraising page for the girls. (Brian Cassella/Chicago Tribune via AP)(Photo: Brian Cassella / AP)

Chicago — A Chicago police sergeant who helped give the department’s battered public image a lift by raising money for three little girls found in a filthy, unheated abandoned building last year is now the subject of a department probe into the fundraising effort.

Police spokesman Frank Giancamilli said Friday that the department doesn’t suspect Sgt. Charles Artz did anything “nefarious.” The officers were not trying to hide what they were doing and confined their efforts to when they were off-duty, according to a second police spokesman, Anthony Guglielmi.

But Giancamilli said the fundraiser was linked to a bank account of one of the officers involved — though he would not say which one — and there is a rule of conduct that prohibits officers from seeking or soliciting contributions. “This is being done more for precautionary reasons,” he said.

Some of Artz’s fellow officers are angry and some in the community are confused by the probe at a time when the department is trying to regain public trust damaged by incidents such as the videotaped fatal shooting of black teen Laquan McDonald by a white officer.

“It really sends a mixed message to the officers,” said Sgt. Jim Ade, the head of the sergeants’ union, who likened what is happening to an officer rushing across a street into a burning building only to get a ticket for jaywalking. “They (department superiors) are telling them, ‘We want you to be out there getting involved in the community but when you do we are going to nail you.’ ”

The grandmother of the 7-year-old, 2-year-old and 1-year old girls nicknamed by police the “Englewood Angels” said she can’t believe anyone is even questioning an effort that kept her from being evicted so she could take the children in and keep them out of foster care.

“He did nothing wrong trying to help me, didn’t ask for nothing,” said Delores Anderson. “I was behind on my rent and would have lost my apartment and they wouldn’t have let me have my granddaughters if I didn’t have no way to stay in my apartment.

The story of the girls began last November with news accounts of how they were found alone in an apartment that had no electricity, running water or food. The officers’ efforts to donate things such as diapers, toys, clothing and milk and in their off-duty hours set up a GoFundMe page for the girls received widespread media attention. By the next month they had raised more than $125,000 in donations.

A call to Artz at the police station on the city’s South Side where he works was not immediately returned.

Englewood is one of the highest-crime neighborhoods in a city that had 762 murders last year, the highest in nearly two decades.