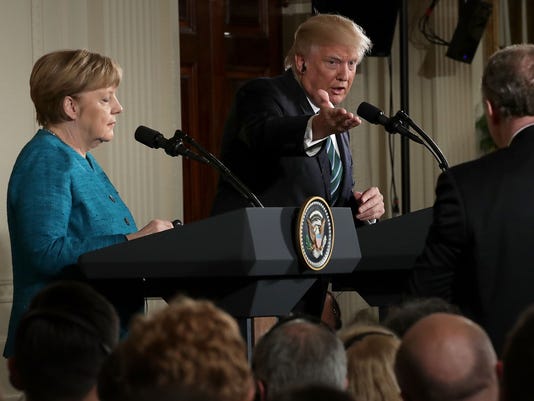 Washington —  President Donald Trump defiantly refused to back down Friday from his explosive claim that Barack Obama wiretapped his phones, and sidestepped any blame for the White House decision to highlight an unverified report that Britain helped carry out the alleged surveillance.

“At least we have something in common, perhaps,” Trump quipped during a joint news conference with Merkel.

Merkel, who was making her first visit to the White House since Trump took office, looked surprised by the president’s comment, which he appeared primed to deliver. The Obama administration’s spying infuriated Germany at the time and risked damaging the U.S. relationship with one of its most important European partners.

Trump’s unproven recent allegations against his predecessor have left him increasingly isolated, with fellow Republican as well as Democratic lawmakers saying they’ve seen nothing from intelligence agencies to support his claim. But Trump, who rarely admits he’s wrong, has been unmoved, leaving his advisers in the untenable position of defending the president without any credible evidence.

On Thursday, spokesman Sean Spicer turned to a Fox News analyst’s contention that GCHQ, the British electronic intelligence agency, had helped Obama wiretap Trump. Fox News anchor Shepard Smith said Friday that the network could not independently verify the reports from Andrew Napolitano, a former judge and commentator who has met with Trump.

The GCHQ vigorously denied the charges in a rare public statement, saying the report was “utterly ridiculous and should be ignored.”

According to a Western diplomat, Britain’s ambassador to Washington, Kim Darroch, had told the White House Tuesday that Napolitano’s assertions were not true. Still, it was among several news reports Spicer referenced in his briefing Thursday as part of an angry defense of the president’s claims.

Darroch and other British officials complained directly to White House officials after the episode, Prime Minister Theresa May’s office said it had been assured the White House would not repeat the allegations. Spicer was very apologetic when confronted by Darroch at a White House dinner on Thursday, the Western diplomat said.

But Trump himself offered no public apologies and suggested there was nothing wrong with the White House repeating what it had heard.

“All we did was quote a certain very talented legal mind who was the one responsible for saying that on television,” Trump said during Friday’s news conference. “You shouldn’t be talking to me, you should be talking to Fox.”

Spicer was also defiant Friday, telling reporters: “I don’t think we regret anything.”

A White House official confirmed that Darroch and the British prime minister’s national security adviser, Mark Lyall Grant, expressed concerns to both Spicer and Trump’s national security adviser, H.R. McMaster. Spicer and McMaster said that the press secretary was simply pointing to public reports and not endorsing any specific story, the official said.

The U.S. and United Kingdom are members of the Five Eyes intelligence-sharing alliance, which prohibits members from spying on each other. Australia, Canada and New Zealand are the other members.

The diplomat and White House official both spoke only on condition of anonymity to discuss private conversations.

The president is a voracious consumer of news and frequently repeats information he reads or hears on television, often without verifying it first. It was a story in Breitbart — the far-right website once run by his senior adviser Steve Bannon — that appeared to spark Trump’s March 4 tweets accusing Obama of wiretapping the New York skyscraper where he lived and ran his presidential campaign.

The White House has asked the House and Senate intelligence committees to investigate the matter as part of their inquiries into Russia’s hacking of the presidential election and possible contacts between Trump associates and Russian officials. But the top lawmakers on both committees have said they have seen no indications that Trump Tower was wiretapped.

The Justice Department said Friday that it had complied with congressional requests for information related to any surveillance during the 2016 election. The department would not comment further on what information, if any, was provided.

“A president only has so much political capital to expend and so much moral authority as well, and so any time your credibility takes a hit, I think in many ways it weakens the officeholder,” Dent said.

FBI Director James Comey is sure to be asked about the wiretapping allegations when he testifies on Capitol Hill Monday. The public hearing is the first of several that the intelligence committees are expected to hold on Russia’s interference in the election.