Easier classes, less homework and lots of sports — this is how American high schools are viewed by foreign students 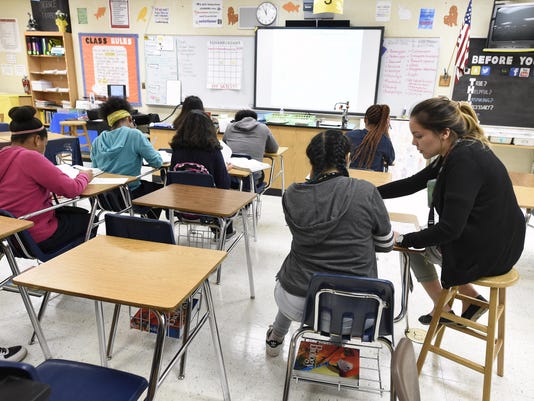 In the survey conducted last spring, 259 teenagers from various countries compared their experience in American schools to that in their home countries.(Photo: RHONA WISE / AFP/Getty Images)

Washington — Easier classes, less homework and lots of sports — this is how American high schools are viewed by students from other countries studying in the U.S.

Despite a push in recent years to make the U.S. education system more competitive and effective, foreign exchange students continue to view American high school experience as much less stimulating, according to a study published Wednesday.

“You get this feeling — the kids from abroad come here, they spend a year, they think that school is easier here,” said Tom Loveless, a fellow with the Brown Center on Education Policy with the Brookings Institutions. “We think we have made great strides in making our schools more challenging, here is at least one outside group that is in fact saying they are not terribly challenging.”

While the findings appear to corroborate international student assessment tests, in which American schools trail behind many developed countries, some experts disputed the methodology and the underlying principles of Loveless’ study, saying that foreign exchange students did not represent typical teenagers in their home countries and that the focus on sports wasn’t necessarily a bad thing.

In the survey conducted last spring, 259 teenagers from various countries compared their experience in American schools to that in their home countries. All the students were in the U.S. as part of the AFS Intercultural Programs, an international youth exchange organization.

Forty-four percent of respondents said U.S. students spend “much less” time on schoolwork than at their home countries, while 21 percent thought they spend “a little less.” Asked, how difficult their classes are in the U.S., 66 percent said they are “much easier” and 24 percent said “a little easier.” The results were similar compared to a similar study Loveless conducted in 2001, but the differences were more pronounced.

“So the kids are saying, in terms of my peer groups in my home country, our peer culture rewards success at math more than it does in the U.S. and it does not reward sports so much,” Loveless said.

But Jack Buckley, senior vice president for research and evaluation at American Institutes for Research, said that the methodology for Loveless’ study does not make sense.

“It’s unlikely that foreign exchange students are a particularly representative sample of their home countries,” Buckley said, adding that such students are likely more ambitious, come from wealthier families and thus attend better schools. AFS said that its one-year program in the U.S. can cost up to $16,000, though some students get scholarships.

Buckley also noted that American high schools can be drastically different from one another. He cited an international student achievement study called PISA which last year ranked the US 25th out of 50 participating countries, below Canada, Britain and Poland. While the average math score for the entire country was 470, the wealthiest schools scored 530, similar to Japan and Finland, while the poorest schools scored 427, on par with Chile and United Arab Emirates.

“Anybody who tells you they generalize about American high schools by just looking at ratings and a few numbers is underestimating the variability in American education,” Buckley said.

Martin Carnoy, professor at the Graduate School of Education at Stanford University, said that while some parents abroad like their kids to concentrate solely on homework, in the American culture many parents believe that playing sports makes one a well-rounded person and teaches them important social skills such as teamwork and perseverance. Also, it makes them feel good.

Abdalla Fadhili Abdalla, 16, an exchange student from Kenya agreed with Loveless’ findings, saying he found his U.S. high school to be less demanding than at home — the days are shorter, there are fewer subjects and less homework.

“School is easier here and harder in Kenya, I have a lot of homework in Kenya,” Abdalla said. At the same time, he enjoys weightlifting at his Maryland high school, saying: “I think it’s kind of good to combine sports and studies.”