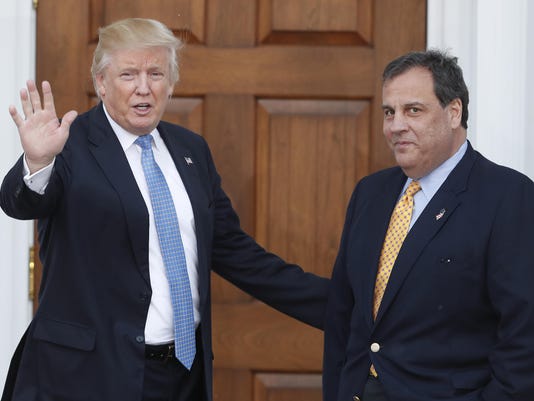 In this Nov. 20, 2016 file photo, then President-elect Donald Trump, left, waves to the media as New Jersey Gov. Chris Christie arrives at the Trump National Golf Club Bedminster clubhouse, in Bedminster, N.J. After being unceremoniously dropped from President Donald Trump’s transition team, New Jersey Gov. Chris Christie is dipping his toes into the administration as he takes the lead of a White House commission to combat opioid addiction.(Photo: Carolyn Kaster / AP)

Trump said his administration wants “to help people who have become so badly addicted.”

He kicked off a commission to combat the growing problem at an event Wednesday at the White House. New Jersey Gov. Chris Christie, who spoke emotionally about the problem during his presidential campaign, will lead the commission.

Trump promised to step up drug prevention and law enforcement of drug dealers and he told one woman who lost her son to an overdose that he did not die in vain. He also told a recovering addict that she was “a perfect person.”