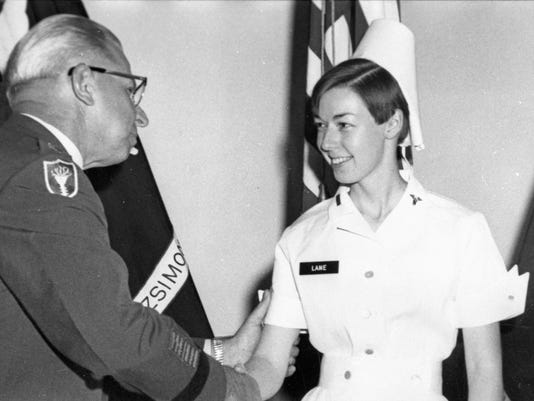 In this Aug. 30, 1968, photo provided by Philip Bigler, author of Hostile Fire, U.S. Army nurse Sharon Lane is congratulated by a military official as she's promoted to first lieutenant in Aurora, Colo. Lane, the only American servicewoman killed by hostile fire in the Vietnam War, has been immortalized in books, statues and a television show, and veterans still gather at her grave five decades after her death.(Photo: U.S. Army/Hostile Fire/Vandamere Press via AP)

Cleveland — Minutes before 6 a.m., Army nurse Martha Green woke with a jolt to a thunderous explosion half a mile away. It was the steamy morning of June 8, 1969, and she was in her bed at Chu Lai base at the height of the Vietnam War.

Green’s husband returned with tragic news: A Soviet-built rocket had struck the hospital, and Sharon Lane, 25, a fellow nurse from Ohio, had been killed instantly.

“The news struck me like lightning,” said Green, who’d chat with Lane while stationed on the same shift. “She was a very sweet, quiet young woman. The sadness was really palpable.”

Today, Lane is immortalized in books and statues, and she even helped inspire characters in a television show. Among the roughly 11,000 American women stationed in Vietnam, Lane was the only one killed by hostile fire during the decadeslong war. Seven other women died in accidents and illnesses.

Her biographer, Philip Bigler, calls her “a symbol” of nurses at war. Lynda Van Devanter, the nurse whose memoir inspired “China Beach,” a late 1980s drama about women in Vietnam, recalled the searing shock of Lane’s death the very day she arrived in Vietnam.

“I suddenly became very aware that women could in fact be in danger, and that this was no game anymore,” Van Devanter said in a documentary interview.

Among the hundred or so nurses at Chu Lai, Lane stood out. She was shy, several years older than most and had volunteered to go to Vietnam instead of being ordered there.

“Most nurses had just graduated nursing school,” said Rosalie Smith, a Chu Lai nurse. She and other nurses had received army stipends in school and were directed to Vietnam. “Her motivation was maybe a little different.”

According to Bigler’s biography, Lane was young and restless. After two years of nursing in her native Canton, Ohio, she quit and tried secretary school, then astonished her parents by enlisting and heading to a Colorado army hospital instead. She found life there to be dull, filled with nights alone watching television, and requested a transfer to Vietnam months after her arrival.

“There, at least, you are busy 12 hours a day, six or seven days a week, and you learn everything,” Lane wrote her parents in 1968.

When Lane arrived in Vietnam in April 1969, she found the work and camaraderie she was looking for. Weeks after she arrived, sirens went off as two rockets slammed the compound, but Lane took it in stride.

“Very interesting place but hardly anyone here is scared though. It is just like part of the job,” she wrote.

Colleagues remember Lane for throwing herself into her work at the Vietnamese ward, notoriously difficult because it held prisoners of war. Vietcong soldiers, strapped into beds, would kick, curse and spit at the nurses.

“She didn’t make a big deal out of it,” Green said. “She said she was a nurse, and she had to take care of patients. It didn’t make a difference whether they were Vietnamese or POWs or our own soldiers.”

Two days after her death, staff gathered at a simple chapel to pay homage to Lane. But amid an endless torrent of injured and dying soldiers, the shock of Lane’s death was swept away.

This Memorial Day, her friends and colleagues’ thoughts drift back to that fateful day. But some would rather forget.

Cannon Sample was a hospital corpsman who was in Lane’s ward when she was killed. Forty-eight years later, he still has nightmares about that morning.

Still, every year, a group of veterans gather at her grave to pay respects to Lane, vowing to keep her memory alive.

“Oh yes,” says Pat Powell, leader of the veteran’s association. “Until we die.”