The oil pipeline study is likely to take the rest of the year to complete, U.S. officials said 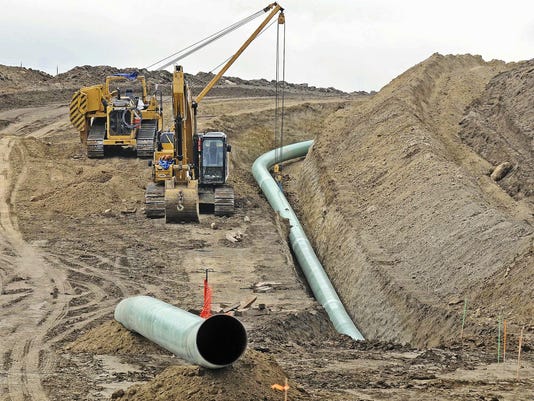 FILE - In this Oct. 5, 2016, file photo, heavy equipment works at a site where sections of the Dakota Access pipeline are being buried near the town of St. Anthony in Morton County, N.D. The Army Corps of Engineers says additional environmental review of the already-operating pipeline ordered by a judge in June 2017 is likely to take the rest of the year.(Photo: Tom Stromme / AP)

Bismarck, N.D. — Additional environmental review of the disputed Dakota Access oil pipeline is likely to take the rest of the year to complete, U.S. officials said in court documents in which they also advocate for keeping the line operating during the study.

The $3.8 billion pipeline from North Dakota to Illinois was finished after President Donald Trump pushed through its completion despite opposition and an ongoing lawsuit by American Indian tribes, who fear environmental harm. Since June 1 it has been moving nearly half of the daily oil production in North Dakota, the nation’s second-leading producer behind Texas — a total so far of more than 18 million barrels, or 756 million gallons.

Boasberg last month ruled that the Army Corps of Engineers largely complied with environmental law when permitting the pipeline but that it didn’t adequately consider how an oil spill under the Missouri River might affect the Standing Rock Sioux tribe. He ordered the Corps to reconsider certain areas of its environmental analysis and is accepting arguments from attorneys this summer on whether he should shut down the pipeline while the work is done — a move he has said “would carry serious consequences that a court should not lightly impose.”

Corps attorneys in documents filed Monday maintain that the agency expects to be able to substantiate its earlier determination that the pipeline poses no significant environmental threats.

“The low possibility of an oil spill means that there is little chance that (tribal) plaintiffs will be harmed at any time, much less during the remand period, which is anticipated to be completed by the end of the year,” Corps attorney Reuben Schifman wrote.

Standing Rock attorney Jan Hasselman in an interview said the comments indicate the Corps plans to “simply paper over the existing decision.” He called for shutting down the pipeline and bringing in independent experts as “the only way to ensure the integrity of this new process.”

ETP attorney William Scherman said in court documents that oil producers and refiners, workers, customers, consumers and government tax revenue would be affected by a shutdown.

“The process of temporarily shutting down a 1,200-mile pipeline is itself extremely costly, immensely complicated and burdensome, time-consuming, and ultimately more of a risk to the environment than allowing the flow of oil to continue,” Scherman wrote.

The company already experienced months of delays in getting the pipeline operational due to the court battle and on-the-ground protests in North Dakota, and more delay “would add insult to injury,” he said.

Several state and national energy and manufacturing trade groups, including the American Petroleum Institute, have asked Boasberg to let them have a say in the debate, saying a shutdown would harm businesses throughout the domestic energy industry. The North Dakota Petroleum Council, which represents more than 500 energy companies including ETP, said no one involved in the lawsuit speaks for the general oil industry.