About 1,000 people joined the Georgia Democrat on a march through the crowded San Diego Convention Center 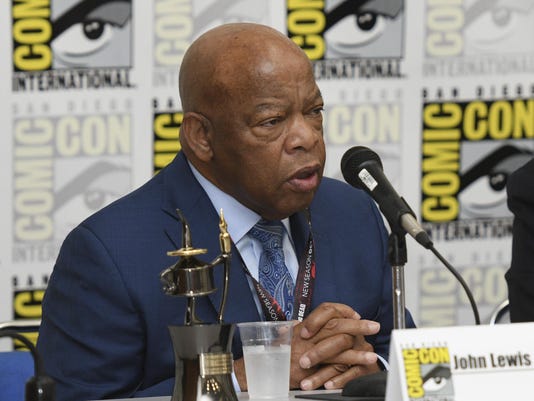 About 1,000 people joined the Georgia Democrat on a march through the crowded San Diego Convention Center following a panel discussion about his trilogy of graphic novels, “March.”

Some chanted “No justice, no peace” as the group wound its way past costumed characters and mystified conventioneers. Those who recognized the congressman stopped to greet him and shake his hand. One man confessed that he was near tears at the opportunity to meet someone so instrumental in the fight for social change.

“Thank you for all that you’ve done,” the man said. 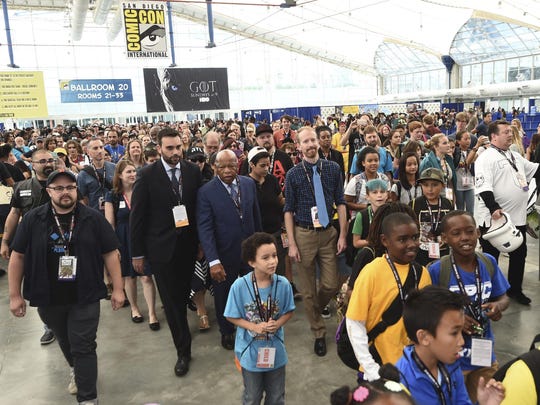 Lewis was welcomed with a standing ovation when he and his co-authors, Andrew Aydin and Nate Powell, walked into the room for their presentation. Scores of elementary school students were seated in the front row.

In his commanding style, Lewis was almost like a preacher as he urged students to remain optimistic and to believe in their power to contribute.

The “March” series tells the story of Lewis’ childhood and how he became an activist for civil rights. It details the movement’s non-violent protests, from sit-ins at lunch counters in the South and the bus boycott in the mid-1950s to the marches in Selma, Alabama, and Washington, D.C.

The book is being used in schools across the country to teach young people about the history of civil rights, “March” editor Leigh Walton said. One woman who stopped Lewis to thank him for all he’s done said she teaches the books in her classes at University of California, San Diego.

Lewis hadn’t set out to become a comic-book hero, but he was receptive when Aydin, who worked on his campaign, approached him with the idea. Lewis had told his young aide a story about a comic book he read in 1957 about the Rev. Martin Luther King, Jr.

Aydin ended up doing his graduate thesis on that publication. He thought his boss’ story could have the same power to inspire.

“I thought, ‘Why isn’t there a John Lewis comic book?’” Aydin said.

He interviewed Lewis for hours to create a manuscript of more than 600 pages, which illustrator Powell brought to life in images. They rigorously fact-checked their work so that the story could serve as a real historical guide.

“I think it’s important that we’re providing a common understanding of our past,” Aydin said in an interview. “Particularly as it pertains to this time in our history.”

The trilogy has won many accolades since the first book was published in 2013. The third volume received Comic-Con’s Eisner Award on Friday for best reality-based work, and the three authors were surprised at Saturday’s panel with Comic-Con’s Inkpot Award, which recognizes outstanding achievements in comics, sci-fi and fantasy.

“I didn’t know the story would have such a powerful reception,” Lewis said in an interview before the panel.

The panel veered slightly into political territory. Lewis declared that he believes health care is a right. One panel guest asked why he supported Hillary Clinton instead of Bernie Sanders in the race for president. Another asked about how to distinguish fake news from real.

But the writers’ main message was one of inspiration. Lewis said he was only 15 when he first heard King speak, and it made him believe he could make a difference toward righting the injustices of discrimination and segregation.

“I saw something that I was not pleased with. I was not at home with myself, and I wanted to do something about it. But I didn’t know what to do,” Lewis said. “And I heard the voice, the words of Martin Luther King, Jr., and it seemed like saying, ‘John Robert Lewis, you too can do something.’”