With old rivals the Times and Post competing to break exclusives, it feels like there’s something new every few hours 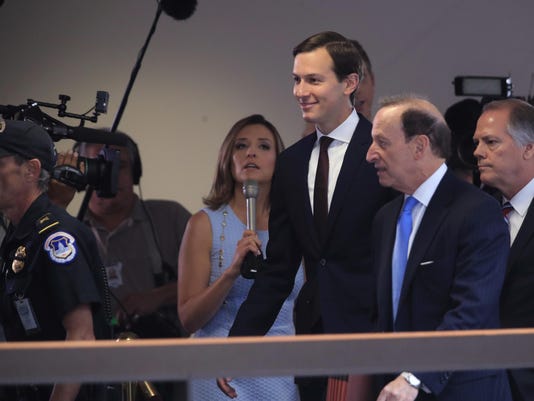 White House senior adviser Jared Kushner, center, accompanied by his attorney Abbe Lowell, second from right, arrives on Capitol Hill in Washington, July 24, 2017, to meet behind closed doors before the Senate Intelligence Committee on the investigation into possible collusion between Russian officials and the Trump campaign. Print outlets like The New York Times and Washington Post have developed a mutually beneficial relationship with cable television news over a string of bombshell stories about the Trump administration. It’s a news war with a twist.(Photo: Manuel Balce Ceneta / AP)

New York — Print outlets like The New York Times and Washington Post have developed a mutually beneficial relationship with cable television news over a string of bombshell stories about the Trump administration. It’s a news war with a twist.

Prime-time lineups on CNN and MSNBC are repeatedly thrown into chaos by late-breaking stories that, while nerve-wracking, nonetheless provide the sort of compelling, can’t-turn-away programming that producers dream about.

“It’s hyper-unpredictable,” said Charles Moore, executive producer of “Anderson Cooper 360” on CNN. “The unpredictability has become the norm and that is very unique.”

Last Wednesday saw a succession of stories breaking after 6:30 p.m.: News about another effort to repeal President Barack Obama’s health care law, President Trump’s son and son-in-law compelled to testify before Congress and Sen. John McCain diagnosed with cancer. Into this, the Times dropped its startling interview with the president expressing regret at appointing his attorney general. So much for the show that Denis Horgan, executive producer of MSNBC’s “All In with Chris Hayes,” had spent hours preparing.

“It’s hitting like waves crashing over you,” Horgan said. “You’re just trying to catch up.”

With old rivals the Times and Post competing furiously to break exclusives, it feels like there’s something new every few hours. The exposure these stories get on television amplifies their impact, said Rick Edmonds, a veteran newspaperman and media business analyst at The Poynter Institute.

Spokeswomen for the Times and Post said stories are released online when they’re ready, and cable television schedules aren’t taken into consideration. But it certainly doesn’t hurt that these networks reach their biggest audiences in the evening, and have politically oriented programs eager for the latest developments.

The newspapers, and news organizations like The Associated Press, aggressively make their reporters available to talk about their stories on the programs. Networks also have contributor agreements where some reporters are regular guests, as CNN has with Maggie Haberman of the Times and Adam Entous of the Post.

Attention given to these stories help the bottom line, Edmonds said, and is particularly helpful at a time the news companies are shifting emphasis to digital operations. The Times added 308,000 new digital-only subscriptions during the first three months of 2017, its best-ever quarterly performance. A similar measurement from the Post wasn’t immediately available.

The TV producers don’t get any advance warning about a story. “We see it whenever anyone else sees it in their email alerts or over Twitter,” Moore said, noting that CNN checks with its own reporters before rushing another organization’s story to air.

In years past, the shows were usually able to set their evening lineups by 5 or 5:30 p.m., the producers said. If there was breaking news, it tended not to be political.

Now, Moore said, “the rhythms of the day are non-existent.”

The shows keep experts on call to prepare for the unpredictable, and favor versatile guests able to pivot. One day last week, Moore had CNN’s Jeff Zeleny on to speak from the White House lawn, but he wound up reporting on a different story than the one he was originally booked for.

Producing in this atmosphere is frantic and exhausting, “but it’s why we signed up for this,” Horgan said.

“You’ve got a whole lot of news organizations, particularly the Times and the Post, who are clicking on all cylinders and doing work that blows your mind,” Horgan said. “It feels like an exciting time to be a journalist.”

The late-breaking developments don’t get nearly the attention on Fox News Channel, still the top-rated network on cable. The news frequently casts Trump in a negative light, and Fox is the venue most Trump supporters prefer. A day after cable rivals chewed over Trump’s previously unreported discussion with Russian President Vladimir Putin, Fox’s Sean Hannity — who usually tapes his show in the late afternoon — admonished the “destroy-Trump” media for how it handled the story.

With the bad news about Trump, Fox has turned attention to an old target: defeated Democrat Hillary Clinton, now a private citizen living in Chappaqua, New York. During the week of July 13, Hannity’s show spent 44 minutes and 34 seconds talking about efforts to pass a new health care law, and one hour, seven minutes and 31 seconds talking about Clinton, said the liberal media watchdog Media Matters for America.

Fox averaged more viewers in prime time than CNN and MSNBC combined during the first month of the Trump administration, and before Bill O’Reilly’s forced exit. MSNBC has taken the best advantage of the news environment lately. Its July prime-time average of just under 2 million viewers compares to 2.38 million for Fox and CNN’s nearly 900,000, the Nielsen company said.