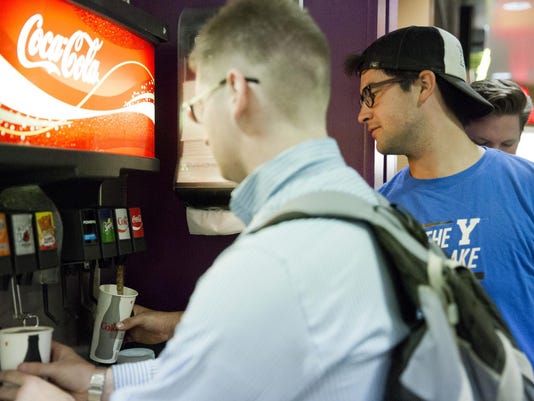 Some locations on Brigham Young University’s campus have started serving caffeinated beverages and it will be offered at sporting events.(Photo: Sammy Jo Hester / AP)

Salt Lake City — Mormon church-owned Brigham Young University ended a six-decade ban Thursday on the sale of caffeinated soft drinks on campus, surprising students by posting a picture of a can of Coca-Cola on Twitter and just two words: “It’s happening.”

The move sparked social media celebrations from current and former students, with many recalling how they had hauled their own 2-liter bottles of caffeinated sodas in their backpacks to keep awake for study sessions.

The university never banned having caffeinated drinks on campus, and many people remembered how faculty mini-fridges were the only place where the drinks could be found.

“I drank a lot of caffeinated beverages while I was here but none of them was purchased on campus,” said Christopher Jones, 34, a visiting BYU history professor and former student.

Jones said he didn’t know whether to believe it when he saw the announcement on his phone so he walked to a student center and saw the first bottles being stocked in vending machines and refrigerators.

“Did I just buy the first-ever caffeinated Coke Zero Sugar sold in #BYU’s Wilkinson Student Center?” he tweeted. ‘Yes, yes I did.”

The university decided in the mid-1950s that no caffeinated beverages would be sold on campus and didn’t budge on its policy — even when The Church of Jesus Christ of Latter-Day Saints in 2012 clarified that church health practices do not prevent members from drinking caffeinated soft drinks.

The university said then that it was sticking to the policy because there was little demand for the drinks on campus. But the school of 33,000 students in Provo, Utah, said Thursday that increasing demand had prompted the change.