A group of teenagers on Saturday launched a 50-mile walk from northern Mississippi to Memphis, Tennessee

The group plans to attend events commemorating the 50th anniversary of King's death in Memphis on Wednesday.(Photo: Adrian Sainz, AP)

Dundee, Miss. – Wearing aqua-colored T-shirts and hydration backpacks, a group of teenagers on Saturday launched a 50-mile walk from northern Mississippi to Memphis, Tennessee, a tribute to slain civil rights leader Martin Luther King Jr. on the 50th anniversary of his assassination.

Escorted by police cars, support vans and a portable restroom, six middle school, high school and college students, along with two adult mentors, began their march in rural Dundee. Their journey along Highway 61 will take them past Mississippi Delta fields and farms, then the casinos of Tunica, before they meet friends and family on the Tennessee-Mississippi line Tuesday.

The decision to walk 50 miles was deliberate; the distance represents one mile for each year since King was gunned down while standing on the balcony of the old Lorraine Motel in Memphis on April 4, 1968. The teens, who are from Pearl and Richland, will discuss issues related to race and civil rights as they make the slow trek to Memphis.

“It’s a way to show people that you can have friendships with different people of different backgrounds, different races, on all levels,” said Damonte Steele, a 15-year-old sophomore at Pearl High School.

A group of teenagers from Mississippi and their mentor, Jarvis Ward, right, say a prayer before launching a 50-mile march to Memphis. (Photo: Adrian Sainz / AP)

Steele is in ROTC at Pearl High School with his 18-year-old friend Benjamin Rutledge, who is white. Rutledge said King “changed a lot of our viewpoints here in America.”

“I like doing events that challenge me and improve my character, and allow me to meet people too,” Rutledge said.

The group gathered at the post office in Dundee, one of many small communities nestled in the flatlands along the Mississippi River in the northern part of the state. Their police escorts inched along as the band trudged down the side of the road known as the Blues Highway.

They plan to walk about 10-15 miles per day until they reach their destination. The group will take part in community meetings after they finish for the day, and will spend their nights in hotels, said organizer Jarvis Ward.

The teens will convene a youth rally Tuesday. On Wednesday, they will take part in activities at the National Civil Rights Museum, located at the site of the former Lorraine Motel. 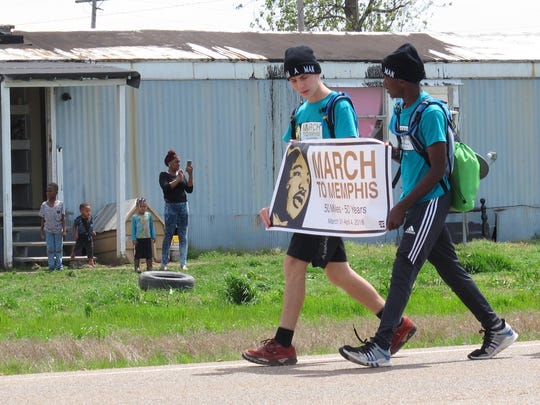 “Our hope is to not only honor all that Dr. King achieved, but to be part of continuing his work,” said Ward, president of the Pearson Foundation, a community service organization based in Pearl. “We want to show how racial justice, economic justice and racial reconciliation can be advanced in and by the next generation.”

Motorists slowed down Saturday to look at the eight people walking on the highway. One trucker honked his booming horn.

Linda Stanton watched the group as she and her dog stood outside her trailer, one of the few structures stationed along the highway in the Dundee area. Stanton, 54, said the teens’ effort was special.

“Smart kids trying to help the future,” she said.