Students made big gains in the 1990s and early 2000s, but there have been no major improvements since then 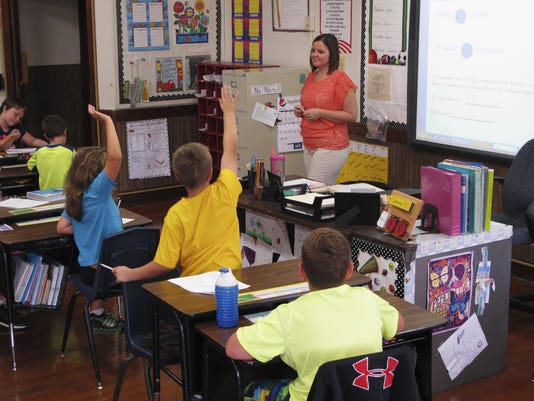 In this Sept. 18, 2013 photo, Shelly Ellis teaches fourth-grade students in a newly air conditioned classroom at Bement Elementary School in Bement, Ill. The results of the latest Nation’s Report Card are in and the news isn’t good. Fourth-graders made no improvements in math or reading, while eighth-graders’ scores were flat in math and only slightly improved in reading.(Photo: David Mercer / AP)

Washington – The results of the latest Nation’s Report Card are in and the news isn’t good.

Fourth-graders made no improvements in math or reading, while eighth-graders’ scores were flat in math and only slightly improved in reading, according to results released Tuesday on the National Assessment of Educational Progress.

Overall, only roughly a third of American eighth-graders are proficient in reading and math along with about 40 percent of fourth-graders.

The figures are in line with recent trends. Students made big gains in the 1990s and early 2000s, but there have been no major improvements since then.

The results show that racial disparities persist. African-American students were out-performed by their white peers at both grade levels.

Education Secretary Betsy DeVos says the country needs to do better for its students, citing the stagnating reading and math scores.

“More alarmingly, the gap between the highest and lowest performing students is widening,” DeVos added.

She singled out Florida’s results for praise. Fourth-graders there improved in math, and eighth-graders had gains in both math and reading.

DeVos said Florida has a strong publicly funded charter and private school program – a strong priority for the Trump administration.

“Florida’s results show what is possible when we focus on individual students,” DeVos said.

“There is still much work to be done to close achievement gaps and ensure that our young people are ready for success in college, careers and life,” said Carissa Miller, executive director of the Council of Chief State School Officers. “It is clear we as a country must do better by all of our students, especially our lowest-performing kids.”

The results were the first since the test was changed from paper to computer-based.

Michigan improved its national rankings in all four areas of last year’s National Assessment of Educational Progress, yet its scores remained below national averages for the rigorous exam that is given every two years to a sample of students in each state.