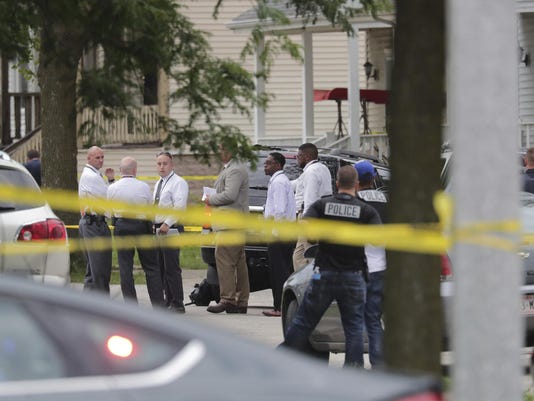 Milwaukee – A Milwaukee police officer was shot and killed during an exchange of gunfire with a man wanted for drug and gun crimes, the city’s police chief said.

The lone suspect was arrested and was not injured in the shooting Wednesday evening, Chief Alfonso Morales said at a news conference.

Police have not released the names of the suspect and the officer killed – the second Milwaukee officer to die in the line of duty in the last two months.

Officers went to a residence on the city’s north side looking for a suspect wanted for gun and drug offenses around 5 p.m., Morales said. The man pulled out a firearm, prompting the fatal exchange of gunfire.

The 17-year police veteran was taken to Froedtert Hospital. Police vehicles with their squad lights activated later escorted his body from the hospital to the Milwaukee County Medical Examiner’s Office.

Mayor Tom Barrett responded to the scene in Metcalfe Park neighborhood and asked residents to pray for the families of the city’s police officers.

“Words cannot describe the sorrow and anger I feel at this moment,” Barrett said. “This officer had been on the department a long time. Well respected, well liked, and was doing what he was hired to do – to protect us,” he said.

Milwaukee Police Officer Charles Irvine Jr., 23, was killed June 7 in a squad car crash during the high-speed pursuit of a suspect. Irvine was the first Milwaukee officer killed in the line of duty in 22 years.