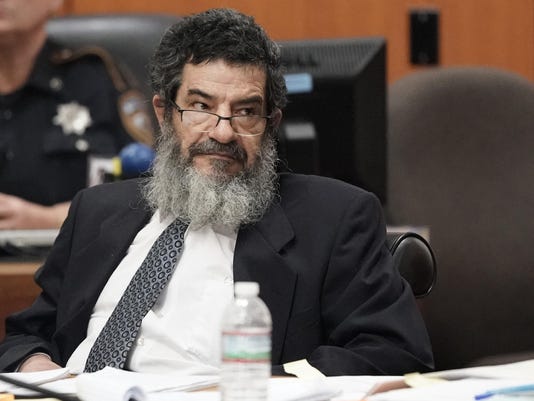 In this June 25, 2018, file photo, Jordanian immigrant Ali Mahwood-Awad Irsan sits in court in Houston. Irsan was convicted Thursday, July 26, 2018, for two slayings described by prosecutors as "honor killings." They say Irsan was enraged when his daughter left home and converted to Christianity, so he orchestrated the killings of his son-in-law and his daughter's friend who had encouraged the marriage.(Photo: Melissa Phillip / AP)

Houston – A Jordanian immigrant could face the death penalty after a Texas jury convicted him of killing his daughter’s American husband and an Iranian women’s rights activist in what prosecutors described as “honor killings.”

Prosecutors say Ali Mahwood-Awad Irsan was enraged when Nesreen Irsan left home to marry a Christian and convert to Christianity, so he orchestrated the killings of his son-in-law and his daughter’s close friend who had encouraged the marriage.

“Honor and shame, that’s what this is all about,” special prosecutor Anna Emmons told jurors. “You heard him say honor is a big deal to him. And the only way to clean that honor is to kill.”

Irsan’s trial in Houston lasted five weeks, but jurors deliberated for just 35 minutes Thursday before convicting him in the deaths of Coty Beavers and Gelareh Bagherzadeh, according to the Houston Chronicle . A sentencing hearing was set to begin Friday. Irsan faces life in prison or the death penalty.

Irsan testified that his daughter caused his family pain after running away to marry Beavers, and that Bagherzadeh had encouraged the union.

Nesreen Irsan testified that her father forbade her from dating Christians. She said she went to court to obtain a protective order to stop her family from harassing her after she moved in with Beavers.

Ali Mahwood-Awad Irsan acknowledged that he violated the protective order by continuing to call his daughter and drive near Beavers’ home. But he said he was concerned his daughter was on drugs and making bad decisions.

Among the nearly 100 witnesses in the trial was Irsan’s wife, Shmou Alrawabdeh, who testified last week that her conservative Muslim husband believed he had to kill Beavers to restore his honor. She told the jury that Irsan sneaked into Beavers’ apartment and shot him to death.

Alrawabdeh was also charged in the case, but she pleaded guilty to a lesser kidnapping charge in exchange for testifying against Irsan.

Irsan alleged in his testimony that his son, Nasim Irsan, was selling drugs and had attempted to poison him. Nasim Irsan, 24, is being held in Harris County jail on capital murder charges in the two slayings.