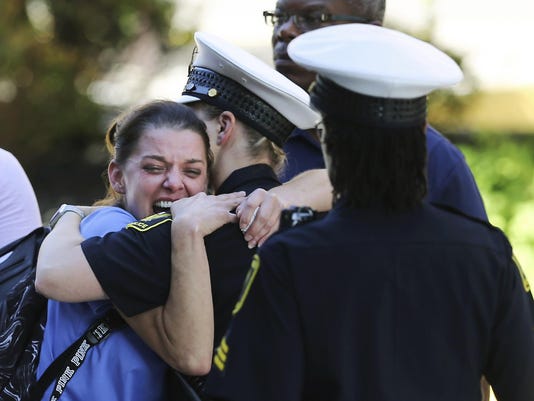 In this Sept. 6, 2018, file photo, a woman is comforted by authorities stationed outside the University of Cincinnati Medical Center's Emergency room following a shooting in downtown Cincinnati that left at least four dead and several injured in Cincinnati.(Photo: Kareem Elgazzar / AP, file)

Cincinnati – Over four decades with The Associated Press, I have many times thrown clothes into a bag, withdrawn a wad of cash, and stuffed my laptop case with notebooks and pens before rushing by car or plane to a terrible event in someone else’s hometown, state or country.

There are certain images seared into my memory:

■ Heartbreaking security footage of children in the day care of the federal building that would be in ruins after the bombing in Oklahoma City. People wailing and one man’s body wracked with uncontrollable sobs as they returned home after deadly flooding in Falmouth, Kentucky. Taking a rowboat through Hurricane Katrina-flooded New Orleans and seeing a body float by.

■ Mingling among stressed-out family members waiting with Red Cross volunteers for news of loved ones who got trapped in a high-rise hotel fire in San Juan, Puerto Rico. A grieving mother’s eyes moistening and her little grandson looking up quizzically as she talked about his parents in St. George’s, Grenada, where they had been executed in a coup that triggered the U.S.-led invasion.

■ Stunned relatives and scared students describing fatal shootings in their neighborhoods or schools in multiple towns, in multiple states.

This time, it was in my town.

Tweets began showing up the morning of Sept. 6 with reports of an active shooter only a few blocks from my office.

Our videographer, Angie Wang, ran to the city square from the office, our photographer, John Minchillo, from his nearby home downtown.

I confirmed that Cincinnati police were responding to an active shooter, turned up the local TV news, and began writing, assisted by AP reporters and editors in Ohio and across the country also gathering information about the breaking news.

Suspect Omar Enrique Santa Perez lies on the ground, seen behind the glass of the left window pane, after being engaged by police Sept. 7. (Photo: John Minchillo / AP, file)

Soon we learned the details of the latest mass shooting. A gunman had opened fire just after 9 a.m. He walked into the lobby of the Fifth Third Bank building at Fountain Square, the iconic heart of Cincinnati. That’s where I walk many afternoons to get a break, stretch my legs, maybe get a snack, and mainly, just see what’s going on. It could be a concert, dancers, sports on the giant screen, food trucks or T-shirt vendors.

In less than five minutes, the gunman was dead in a hail of bullets and shells fired by four police officers. Omar Enrique Santa Perez had already killed three civilians and wounded two more, and when it was revealed he had 250 rounds of ammunition including extra-destructive hollow-point bullets, all anyone could say is that it could have been much, much worse.

What if he had shown up shooting when the square was filled with people watching Bengals football, or dancing during “Salsa on the Square” night? Or when I was using the ATM next to the bank entrance? In this Sept. 7, 2017, file photo, suspect Omar Enrique Santa Perez is displayed on a security video that was shown during a news conference in Cincinnati, detailing the shooting incident from the previous day in the city's downtown business district. (Photo: John Minchillo / AP, file)

Now my haunting memory is footage of the gunman, striding purposely through the lobby, his right arm held straight to aim and fire his 9 mm handgun over and over and over, not appearing to show any emotion as he pumped rounds into helpless strangers.

“This is Cincinnati, Ohio,” Dr. Lakshmi Sammarco, the county coroner, said Tuesday. “I never would have imagined that would happen here.”

It hit both of her hometowns. She had met at her Cincinnati Hindu temple one of the three victims, a 25-year-old man from her native Tenali, India, whose body was being returned there.

I walked back to Fountain Square on Monday morning, four days after the shooting, as Fifth Third employees returned to work. Some took time out to donate blood inside two vehicles from the Hoxworth Blood Center of University of Cincinnati. The two gunshot survivors, one a Fifth Third vice president shot at least 12 times, have since been released from the UC Medical Center.

Yellow crime tape remained at the building entrance that morning. It’s still not understood why the gunman chose that target.

I have been inside many times. I used to cover Cincinnati-based regional banker Fifth Third Bancorp. Media lawyer and friend Jack Greiner formerly had his office there.

I’ve been to all the food shops, including the Potbelly Sandwich restaurant where the gunman had gone immediately before the shooting.

The shooting made for a long work day, but afterward, I could drive home, dine on my wife Vickii’s chicken tortilla soup instead of ordering a late-night room service burger, and then sleep in my own bed – not in a hotel, or in a rental car, on a storm shelter floor, or in the back of an Army truck. The next morning, I picked from clothes hanging in a closet, not crammed into a travel bag, and drove back to downtown.

I was listening on the way to a satellite radio country music channel and a Connie Smith song came on that I had never heard anywhere before except at Reds baseball games, where it’s a favorite of the team’s owner:

This time, it sounded like something more than just a nostalgic old country tune.