But president said that terrorists “could very well be” among the group. 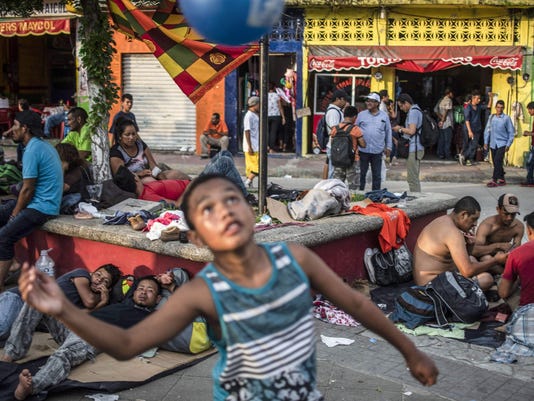 Honduran migrants taking part in a caravan heading to the US, rest at a makeshift camp during a stop in Huixtla, Chiapas state, Mexico, on Tuesday. Thousands of mainly Honduran migrants heading to the United States -- a caravan President Donald Trump has called an "assault on our country" -- stopped to rest Tuesday after walking for two days into Mexican territory.(Photo: PEDRO PARDO / AFP/Getty Images)

President Donald Trump conceded there’s no evidence for his claim that Middle Eastern terrorists are among thousands of migrants traveling from Honduras toward the U.S. border, but blamed Venezuela and unidentified “leftists” for encouraging the so-called caravan.

Trump is trying to make immigration central to the midterm elections next month that will determine whether Republicans maintain control of Congress. He’s expressed outrage about the group of several thousand migrants, which is slowly making its way north from Mexico’s border with Guatemala, and said in a tweet on Monday that the caravan included “unknown Middle Easterners.”

Questioned repeatedly about the claim on Tuesday, Trump conceded that “there’s no proof of anything” but that terrorists “could very well be” among the group. “I think there’s a very good chance you have people in there,” he said.

The administration officials asked not to be identified discussing the issue.

Vice President Mike Pence earlier in the day asserted that “it’s inconceivable that there are not people of Middle Eastern descent in a crowd of more than 7,000 people advancing toward our border.”

Pence also said in remarks at a Washington Post event that “in the last fiscal year, we apprehended more than 10 terrorists or suspected terrorists per day at our southern border.”

Back at the White House, Pence told Trump that the president of Honduras, Juan Orlando Hernandez, had told him the migrant caravan is financed by Venezuela’s government and unspecified leftists.

Earlier on Tuesday, Customs and Border Patrol announced that apprehensions of people illegally crossing the U.S.-Mexico border rose 30 percent in the last fiscal year. The number of migrants who unlawfully entered the U.S. with a family member spiked in September as Trump cast immigration as a crisis.

U.S. officials apprehended 396,579 people between ports of entry on the southwest border between October 2017 and the end of September, CBP reported. That’s up from 303,916 border apprehensions in fiscal 2017, Trump’s first year in office.

The number fluctuates greatly from year to year, however, and border crossings were down from 408,870 in fiscal 2016, the last year of Barack Obama’s presidency. Apprehensions at the southwest border sometimes exceeded 1 million a year under President George W. Bush.