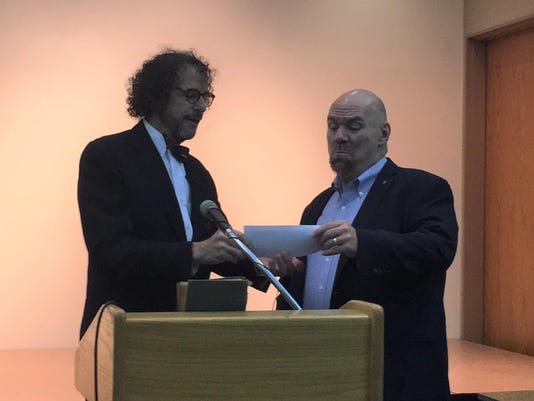 Robert Stroud, left, presents a check to Shreve Memorial Library Executive Director John Tuggle, a donation to the library after returning a book that was 84 years overdue.(Photo: Sarah Crawford / The Shreveport Times)

Shreveport, La. – A man who returned his mom’s very overdue library book is paying her fine – even though he didn’t have to.

She’d checked it out from the Shreve Memorial Library in 1934.

Stroud initially dropped off the book without leaving his name. But then the story of the long-overdue book went viral when the library posted about it on its Facebook page.

They waived their maximum fine of $3.

According to the 1934 library rules listed inside the book, patrons would be charged 5 cents per day for every day books are late. That amounts to just over $1,500.

“My brother and sisters determined (paying the fine) would be a befitting honor to my mom, and also we have an aunt who’s a librarian,” Stroud said.

Stroud said his mother, who was 11 years old when she checked out “Spoon River Anthology,” loved literature and poetry.

“My mom had a great sense of humor,” he said. “I think she would see a lot of levity in this.”

Shreve Memorial Library Executive Director John Tuggle joked that this story might become a lesson to others.

“What I’m going to use it for is to remind all of our patrons that it’s never, ever too late to return an overdue book,” he said.