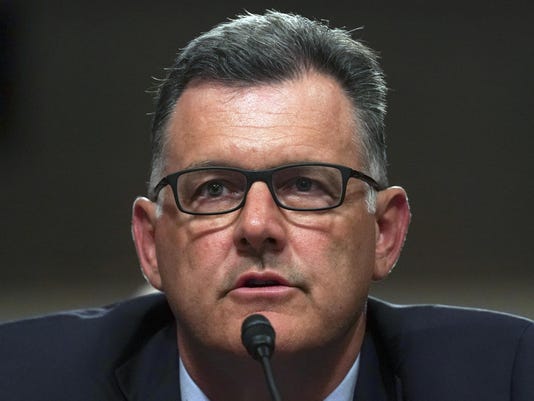 Houston – The former president of USA Gymnastics pleaded not guilty in a Texas courtroom Monday to a charge of tampering with evidence in the sexual assault investigation of now-imprisoned sports doctor Larry Nassar.

Prosecutors accuse Steve Penny of destroying or hiding documents related to Nassar’s activities at the Karolyi Ranch, the ex-national training center near Huntsville, Texas, where a number of gymnasts said Nassar abused them.

Penny’s attorney, Rusty Hardin, said his client participated in a decision by lawyers to transfer the documents “for safekeeping” from the ranch to USA Gymnastics headquarters in Indianapolis. But after that, Penny was “out of the document business.”

“He didn’t receive the documents. He didn’t’ get them at any time … Has no idea what’s in them and he doesn’t know where they are,” said Hardin, a high-profile defense attorney in Houston.

After his brief court appearance in Huntsville, about 70 miles north of Houston, Penny was freed after posting a $20,000 bond.

Penny was arrested earlier this month in Tennessee. He posted bond in Tennessee and traveled to Texas for his initial court appearance.

“At this point, our main desire is to locate the documents and so we will continue discussions with his attorneys,” Weeks said.

The indictment alleges Penny ordered the removal of documents after learning that Texas Rangers and Walker County authorities were investigating the ranch, which was being managed by USA Gymnastics.

Prosecutors have declined to comment on the nature of the missing documents.

Hardin said that at the time the documents were moved from the ranch to Indianapolis, no subpoena or search warrant had been issued for them.

“It makes no sense for the documents to go to (Penny) anyway,” Hardin said. “You would need to have them go to the lawyers who were responsible. There were civil lawsuits being filed. There was all this other stuff going on. Lawyers were in charge of that whole process.”

Hardin said Penny “feels horribly” about what happened to the gymnasts at the hands of Nassar but that Penny was unaware of it.

During a Senate subcommittee meeting in June, Penny refused to answer questions about how he handled the sexual abuse allegations, invoking his Fifth Amendment right against self-incrimination.

More than 250 women and girls say Nassar, who worked for USA Gymnastics and Michigan State University, sexually assaulted them under the guise of medical treatment. He’s now serving up to 175 years in prison for molesting women and girls and possessing child pornography.

Sisters Tasha and Jordan Schwikert filed lawsuits Monday against USA Gymnastics, the U.S. Olympic Committee and Nassar, claiming the organizations failed to prevent the abuse they suffered from the disgraced doctor.

A former sports medicine trainer, Debra Van Horn, was also indicted in Walker County on one count of second-degree sexual assault of a child. Prosecutors said Van Horn was charged as “acting as a party” with Nassar.