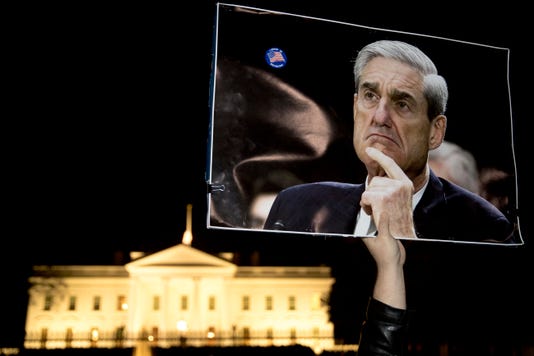 Washington – The White House is bracing for the probe of Donald Trump’s presidential campaign to fire up again. Trump’s advisers are privately expressing worries that the special counsel, who’s been out of the news for the past month, has been stealthily compiling information and could soon issue new indictments or a damning final report.

Trump abruptly altered the chain of command above Mueller on Wednesday, putting his work under the supervision of a Republican loyalist who has been openly skeptical of the special counsel’s authority and has mused about ways to curtail his power. But Trump and his aides are concerned about Mueller’s next move with the work that is complete, according to a White House official and a Republican with close ties to the administration.

They insisted on anonymity to comment on conversations they were not authorized to describe.

Mueller kept a low profile for the past month as voters were mulling their choices for this week’s elections.

But a flurry of activity during his quiet period, including weeks of grand jury testimony about Trump confidant Roger Stone and negotiations over an interview with the president, hinted at public developments ahead as investigators move closer to addressing key questions underpinning the special counsel inquiry: Did Trump illegally obstruct the investigation? And did his campaign have advance knowledge of illegally hacked Democratic emails?

Trump has told confidants he remains deeply annoyed by the 18-month-old Mueller probe, believing it is not just a “witch hunt” but an expensive and lengthy negative distraction. The latest indication of the fury came Wednesday when he forced out his attorney general, Jeff Sessions, whose recusal opened the door to Mueller’s appointment.

To this point, Trump has heeded advice not to directly interfere, though a new chapter in the relationship with the probe may have begun with the appointment of Matthew Whitaker as new acting attorney general. Even if Whitaker, Sessions’ former chief of staff, does not curtail the investigation, Trump could direct him to take a more aggressive stance in declassifying documents that could further undermine or muddle the probe, the White House aide and Republican official said.

The investigation until now has been overseen by Deputy Attorney General Rod Rosenstein, who appointed Mueller last year and granted him fairly broad authority.

“It’s very significant because Whitaker’s position on indictments or future indictments may be different than Rosenstein’s, and Rosenstein had given Mueller a broad mandate to pursue various crimes,” said Washington criminal defense lawyer Jeffrey Jacobovitz.

The Mueller investigation has so far produced 32 criminal charges and four guilty pleas from Trump associates. But the work is not done.

A clear focus concerns Stone, a longtime political dirty trickster. The special counsel’s team has been investigating Stone’s connection to WikiLeaks during the 2016 campaign and whether he had advance knowledge of the group’s plans to release hacked material damaging to Democrat Hillary Clinton.

Stone has said he did not, but emails, Twitter messages and his own public statements show he portrayed himself as plugged into the WikiLeaks orbit. That includes implying he had inside knowledge in separate email exchanges with a Breitbart editor and Steve Bannon, the former Trump campaign chief executive, just days before WikiLeaks began releasing thousands of emails stolen from Clinton campaign chairman John Podesta.

Bannon and other Stone associates have been questioned, and multiple witnesses have appeared before the grand jury. One associate, Jerome Corsi, said in a video recording Monday that he’s “been involved in a really constant basis” for two months with Mueller’s investigation.

On Thursday, a federal appeals court heard a challenge to Mueller’s authority brought by Stone aide Andrew Miller, who defied a grand jury subpoena last summer and was held in contempt by a judge.

In the president’s orbit, there remains some concern about his eldest son, Donald Trump Jr., though there are no outward indications that charges are imminent, according to a Republican close to the White House not authorized to speak publicly about private conversations.

The president hasn’t been charged with any wrongdoing, but federal prosecutors have said that a grand jury investigation is ongoing and it targets unspecified “others.” Court papers show Trump’s conduct and that of top executives at the Trump Organization, some of whom have received immunity, have been scrutinized.

It’s unclear what additional charges prosecutors are pursuing and how much of it pertains to the president personally. Federal prosecutors have said in court papers that the case involves numerous “uncharged” third parties and have argued against disclosing search warrants and other documents that would “certainly result in a very public guessing game” about their identities.

Overseeing it all is Whitaker, a former college football player and U.S. attorney from Iowa who was brought into the Justice Department last year to serve as Sessions’ chief of staff. In the months before, Whitaker was a familiar presence on CNN, where he questioned Mueller’s scope and reach.

In one appearance, he defended a June 2016 Trump Tower meeting between Trump Jr. and a Kremlin-connected Russian lawyer, saying, “You would always take that meeting.”

He also once tweeted an ex-prosecutor’s opinion piece that described the Mueller team as a “lynch mob,” and wrote his own op-ed saying Mueller would be outside his authority if he investigated Trump’s family finances.

Trump had enjoyed Whitaker’s cable TV appearances – including one on CNN in which he suggested that the Mueller probe be starved of resources – and the two men soon struck a bond. Trump told associates that he felt that Whitaker would be “loyal” and would not have recused himself from the Russia probe as Sessions had done, according to two Republicans close to the White House not authorized to speak publicly about private conversations.

Despite demands from Democrats that he recuse because of his past comments, Whitaker showed no signs Thursday that he intended to do so. And not everyone is convinced he needs to.

“Based on my experience with Matt,” said John Richter, a former U.S. Attorney in Oklahoma and high-ranking Bush administration Justice Department official, “I think he will act consistently with the best traditions of the department and call things as he sees them.