Wildfire-charred movie ranch to be rebuilt over 2 years

Wildfire-charred movie ranch to be rebuilt over 2 years 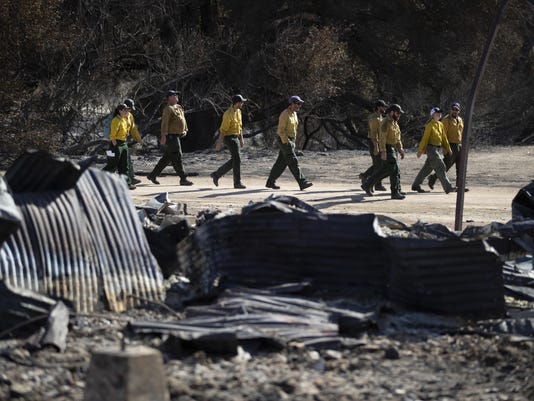 Firefighters walk arrive at decimated Paramount Ranch for a meeting with U.S. Secretary of the Interior Ryan Zinke Thursday, Nov. 15, 2018, in Agoura Hills, Calif. The landmark film location burned to the ground by the Woolsey Fire.(Photo: Jae C. Hong / AP)

Agoura Hills, Calif. – Standing amid the charred foundations and burned-out movie sets of Paramount Ranch, officials from the National Park Service said Friday that they plan to rebuild and reopen the site that holds decades of movie history and still hosts a steady stream of Hollywood productions within the next two years.

Santa Monica Mountains National Recreation Area Superintendent David Szymanski announced the plan Friday as he guided reporters through the twisted metal and ashes that once made up the ranch’s “Western Town,” most of which burned shortly after a huge wildfire broke out Nov. 8 and swept through the surrounding mountains and community, destroying more than 700 homes and other buildings.

“The site is almost a total loss,” Szymanski said. “It’s easy to be somber. But there’s some things that I’m hoping will allow us to be a little bit less somber. We’d like to get Paramount Ranch rebuilt in the next 24 months.”

This Friday, Nov. 9, 2018 file photo shows Paramount Ranch, a frontier western town built as a movie set that appeared in countless movies and TV shows, after it was decimated by the Woolsey fire in Agoura Hills, Calif. (Photo: Marcio Jose Sanchez / AP)

A church built for HBO’s “Westworld” and a train depot constructed for the 1990s CBS series “Dr. Quinn, Medicine Woman,” the two productions most associated with the site, are all that remain of the structures, backed by the blackened hills of a wildfire that many feared for years.

“We’ve all dreaded it, we’ve tried to prepare, but sometimes the wind just takes over,” said Rory Skei, the chief deputy executive officer of the Santa Monica Mountains Conservancy. “We do what we can do.”

Elsewhere on the fire, more residents were allowed Friday to return to homes they fled from days earlier.

Authorities reopened more areas in Los Angeles and Ventura counties. But they kept some locations within the Woolsey Fire zone off-limits because of hazards ranging from burned power poles to compromised gas lines and destroyed roadways.

Although walls of flame and towering columns of smoke were gone, firefighters continue to expand containment lines around the scorched area. Fire commanders said the 153-square-mile burn area was 78 percent surrounded.

The count of destroyed structures reached 713. Another 201 structures were damaged.

Los Angeles County sheriff’s detectives were investigating three deaths. Two adults were found in a gutted car last week, and the remains of a person were found Wednesday in the rubble of a home that had burned to the ground.

Paramount Ranch, where a number of Hollywood westerns have been filmed, is seen after it was decimated by a wildfire Friday, Nov. 9, 2018, in Augura Hills, Calif. (Photo: Marcio Jose Sanchez / AP)

At the Paramount Ranch, structures that served as barns, hotels, saloons and barbershops for decades of movies and TV shows are gone. Workers will salvage what they can and then work to rebuild.

The site began as a set for Paramount Pictures in the 1920s and was taken over by the National Park Service in 1980. It got a major restoration in 1985, with the park service trying to maintain as much as it could from the original buildings. Corrugated tin roofs on many of them still dated to the 1920s. Now those roofs lie burned and twisted on the ground like pieces of a crashed plane.

Western Town specifically was built for TV productions in the 1950s and was used for such westerns as “The Cisco Kid” and “Dick Powell’s Zane Grey Theatre.”

But the site lent itself to productions of all kinds.

“It could be adapted for anything,” Szymanski said. 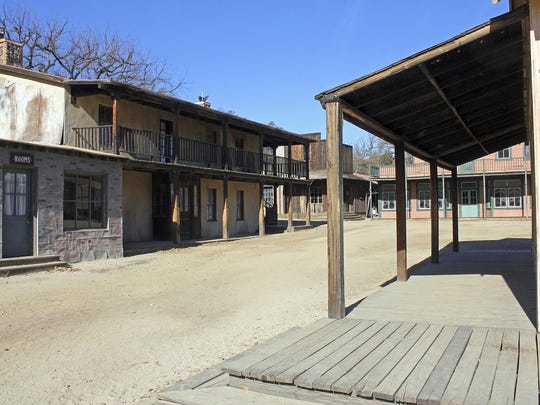 It remained to be seen how much the ranch being out of commission would affect Hollywood productions.

HBO did not immediately answer questions about whether the fire would affect the upcoming season 3 of “Westworld,” or whether production was planned for the ranch at all. The network previously expressed concern for “all those affected by these horrible fires.”

As the ranch’s manmade structures are rebuilt, the stark surrounding hills will most likely take care of themselves.

“All this natural vegetation will regenerate itself,” said Sara Horner, board president of the Santa Monica Mountains Fund. “A year from now, it will be green, from after the rains, and then in a few years, it’ll look pretty much as it did. Nature is amazingly powerful in her ability to heal.”