The Boy Scouts of America deflected questions about a report suggesting it is considering seeking bankruptcy protection, though the head of the organization said it is exploring “all options” 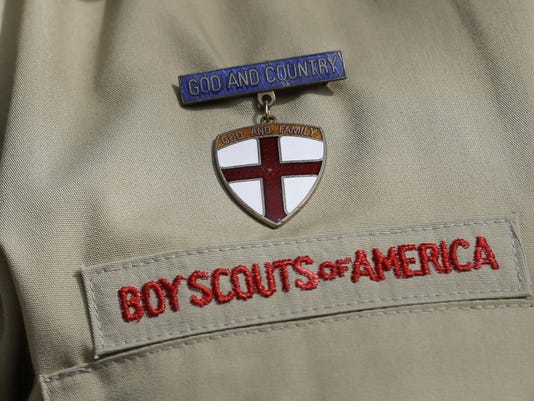 The Boy Scouts of America says it is exploring "all options" to address serious financial challenges, but is declining to confirm or deny a report that it may seek bankruptcy protection in the face of declining membership and sex-abuse litigation.(Photo: Tony Gutierrez / AP)

New York – The Boy Scouts of America deflected questions about a report suggesting it is considering seeking bankruptcy protection, though the head of the organization said it is exploring “all options” as it tries to stay afloat while facing sexual abuse lawsuits and dwindling membership.

“I want to assure you that our daily mission will continue and that there are no imminent actions or immediate decisions expected,” Chief Scout Executive Mike Surbaugh said in a statement issued Wednesday evening.

Surbaugh was responding to a Wall Street Journal report that the BSA, founded in 1910, had hired a law firm to assist in a possible Chapter 11 bankruptcy filing. He described the report as “news speculation,” but he acknowledged that the group is “working with experts to explore all options available” as well as the pressures arising from multiple lawsuits related to past instances of sexual abuse.

“We have a social and moral responsibility to fairly compensate victims who suffered abuse during their time in Scouting, and we also have an obligation to carry out our mission to serve youth, families and local communities through our programs,” Surbaugh said.

Other institutions facing multifaceted sexual abuse scandals have sought bankruptcy protection recently. USA Gymnastics took the step last week as it attempts to settle dozens of lawsuits related to abuse by now-imprisoned gymnastics doctor Larry Nassar. About 20 Roman Catholic dioceses and other religious orders around the U.S. have previously filed for bankruptcy protection as a result of clergy sexual abuse claims.

Surbaugh apologized on behalf of the BSA to those abused during their time in the Boy Scouts.

“We have always taken care of victims – we believe them, we believe in fairly compensating them and we have paid for unlimited counseling, by a provider of their choice, regardless of the amount of time that has passed since an instance of abuse,” he said. “Throughout our history we have taken proactive steps to help victims heal and prevent future abuse.”

In addition to abuse-related litigation, the Boy Scouts have been trying to reverse a decline in membership. The organizations’ current youth participation is about 2.3 million, down from 2.6 million in 2013 and more than 4 million in peak years of the past.

In a major step toward revitalization, the BSA is moving to open all its programs to girls, but even that has caused problems.

Last month, the Girl Scouts of the USA filed a trademark infringement lawsuit against the BSA for dropping the word “boy” from its flagship program in an effort to attract girls.

That suit was in response to the BSA’s decision to rename its program for 11- to 17-year-olds; it will be called Scouts BSA rather than the Boy Scouts, though the parent organization will remain the Boy Scouts of America.

Paul Mones, a Los Angeles-based lawyer who has handled many sex-abuse lawsuits targeting the BSA, said the organization has assets of more than $1 billion, but has been under increasing pressure from litigation as public awareness of sexual abuse intensifies.

Mones was co-counsel in a 2010 sexual abuse case in Portland, Oregon, that led to a nearly $20 million judgment against the BSA on behalf of a man molested by a Scout leader in the 1980s. As a result of that case, the Oregon Supreme Court ordered the BSA to release previously confidential files on suspected abusers.