Fiance of Colo. woman who disappeared charged with murder

Fiance of Colo. woman who disappeared charged with murder 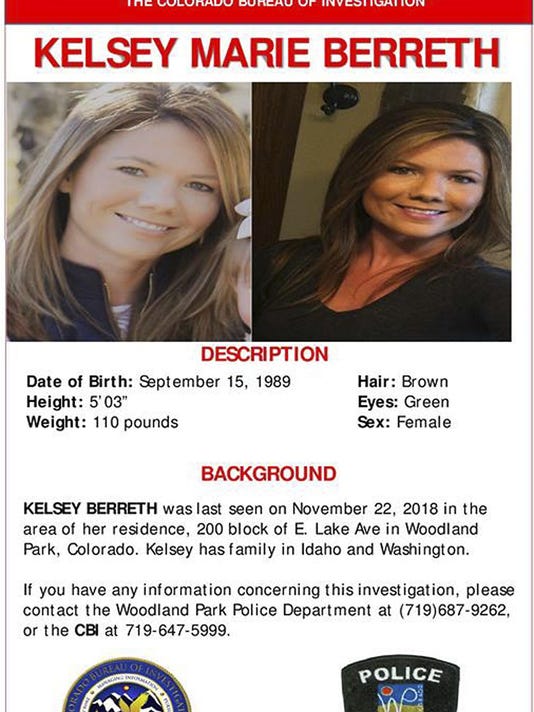 Woodland Park, Colo. – Police in Colorado said Friday that a woman missing since Thanksgiving Day was likely killed at her home, and they have arrested her fiance and charged him with murder.

Woodland Park police Chief Miles de Young would not say whether Berreth’s body had been found or what led to the charges of murder and solicitation to commit murder against Patrick Frazee, allegedly the last person to see 29-year-old Kelsey Berreth. He was arrested at his home and cattle ranch in the central Colorado community of Florissant on Friday morning, Teller County sheriff’s Cmdr. Greg Couch said.

“As you can tell from the arrest, sadly, we do not believe that Kelsey is still alive,” De Young said.

Authorities also won’t say who else might be arrested, or give more details on the solicitation to murder charge, or how they believe Berreth was killed.

Berreth was last seen in a grocery store near her home in Woodland Park, about 15 miles from Florissant. Both towns are high country alpine communities near Pikes Peak and west of Colorado Springs.

Surveillance video showed her entering the store on Thanksgiving Day with what appears to be the couple’s 1-year-old daughter in a baby carrier. Frazee had told police that the couple met sometime that afternoon so he could pick up the child. They did not live together, and the girl was staying with her father.

Friday’s arrest came after police urged Frazee to speak directly with investigators and after a search of his high country ranch property as well as Berreth’s own townhome in Woodland Park. Officials declined to say what they found.

Miles De Young, police chief of Woodland Park, said Frazee had communicated with police through his attorney but hadn’t spoken with them directly.

Police said the only signs of Berreth were some text messages from her cellphone. Location data later suggested that by Nov. 25 the phone was in Idaho, 800 miles from Berreth’s home.

Frazee’s attorney, Jeremy Loew, has said his client was cooperating with the investigation.

Loew previously said his client provided police with DNA samples and access to his cellphone. Frazee told police that Berreth last texted him on Nov. 25, the Sunday after Thanksgiving.

Berreth’s employer, Doss Aviation, received a text message from her cellphone that day saying she planned to take the following week off.

A police investigation was opened Dec. 2 after Berreth’s mother asked for a welfare check. Police said they found both of Berreth’s cars outside her home.

Police also said Doss Aviation had accounted for all their planes and there was no reason to believe she used someone else’s plane for a flight.

Berreth and Frazee did not live together, according to relatives, and Berreth’s daughter has been living Frazee.

According to property records, Berreth purchased her single-family home in Woodland Park in May.