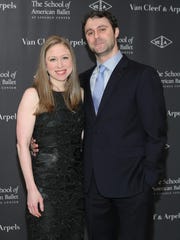 New York – Chelsea Clinton has announced her family is expanding.

The 38-year-old former first daughter tweeted Tuesday that she and her husband Marc are expecting another child in the summer.

The couple has a daughter Charlotte born in 2014 and a son Aidan born in 2016. She did not announce the sex of the third child.

In a reply to congratulations on Twitter, Clinton said Hillary and Bill are thrilled.

Clinton and 41-year-old investment banker Marc Mezvinsky have been married since 2010. They live in New York.

Clinton is writing another children’s book to accompany the two she’s already published. The picture book about endangered animals is slated for an April release.