Nation struggles to contain worst drug crisis in its history

La Quinta, Calif. — There is nothing left to do, no more frantic phone calls to make, no begging or fighting that can fix this because the worst thing that could happen already has, so Doug Biggers settles into his recliner and braces for his daughter’s voice to echo through his head.

It’s been months since they knelt over his 20-year-old son on the bedroom floor. But in these quiet moments, those words haunt him. 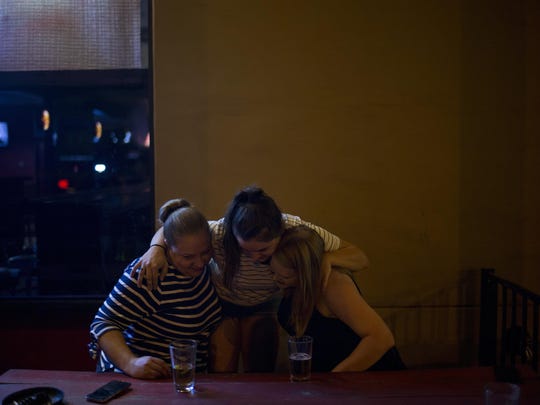 “Don’t give up,” Brittaney had said as he thrust down on his son’s chest — his skin already blue, his hands already clenched. The 911 operator counted out compressions, so he’d pushed and pushed, trying not to cry or be sick, trying not to imagine his son as a little boy, before his addiction turned their lives into a series of crises like this one: sheer terror and futile thrashing to save him.

The paramedics arrived and shook their heads. Brittaney glanced at the clock on the stove to record the moment hope was lost: 11:43 a.m. on Nov. 21, 2017.

Landon Biggers became one of 70,237 Americans dead from overdose that year, most of them killed by opioids. As the crisis barrels into its third decade, opioids alone have claimed more than 400,000 lives. Each left behind a family like this one.

In an instant, the yearslong cycle of treatment centers and jail cells, late-night phone calls, holes punched in walls, emptied 401(k)s — it was all over. And a father, mother and sister were left to torment over what they should have done differently or better or sooner.

There are hundreds of thousands of families like them, and dozens more made each day, as the country continues struggling to contain the worst drug crisis in its history. They suffer in solitude, balancing sorrow with relief, shame with perseverance, resentment with forgiveness.

His wife, Mollie, is on the couch, watching a video of her son shouting at her just to hear his voice again. Brittaney, 28, flops down next to her, having just worked up the will to get out of bed, a hopeful step because some days she can’t.

Brittaney used to worry that her father would die from the stress of Landon’s addiction. Now she worries he will die from grief. For months after Landon died, Doug sat mostly silently, staring at the box of his son’s ashes they store on a shelf above the television, so he’d be here with them.

“I’m scared to lose you,” Brittaney would tell him.

The family had thought for years that they must be the only ones living this nightmare. Mollie dreaded her own house. She’d turn the corner into their subdivision and her throat would be on fire. She swallowed antacid tablets by the handful. So much had happened that anything seemed possible.

There were arrests, car accidents and armed drug dealers that broke into the house. Landon had punched and fought when he was desperate for drugs, so they installed locks on their bedroom doors. He stole from them, so they bought a safe. They tried psychiatrists, medications. Their mission to save him had been so all-consuming, they realized only after it ended that they were just one part of a disaster unfolding all around them.

Brittaney stormed into the house one recent morning. She’d just learned that another friend had overdosed and died, and now she has to count on her fingers how many people she’s lost. Her brother, seven friends.

Doug imagines those parents staying up all night, like he did, desperately trying to manage a system that seemed incomprehensibly broken.

“Any other health crisis that had this many people dying from it, this entire country would be up in arms,” he says. “But so many people still view addiction as a moral issue: You’re not strong, or you don’t have self-control.”

“Or you have bad parents,” his wife moans.

Now he reads everything he can find about the epidemic, and his shame is morphing into anger. He can’t watch the news, because it reminds him that the world is marching on in the face of calamity. The vastness of it overwhelms him, but it also provides cold comfort: They aren’t alone, not even close.

Doug had a dream one night that jolted him out of bed. They were all at the beach. Landon was sitting on the ground, facing the water. He kept calling Landon’s name, but he wouldn’t turn around. He never saw his face.

Was he forgetting his own son?

He realized when he awoke that his great fear is that Landon is nowhere, just gone, doomed by his addiction to leave no legacy.

“I can’t keep doing nothing,” Doug thought, and he climbed out of bed that morning and started searching the internet. He called Denise Cullen, who runs an organization called GRASP, for parents of the dead from addiction. He said he needed to do something so that his son’s life might not be meaningless.

This deep into the opioid crisis, Cullen gets dozens of these calls each week, as grieving parents start looking for a new purpose now that their old one — saving their child — has failed.

Cullen told Doug he’d have to wait; her organization doesn’t let parents begin support groups for at least a year after losing a child. Her own son died 10 years ago, and for that first year after she sat alone in the dark, just staring. It’s usually not until the second year that parents realize how bad the grief can get, she says.

As this past Nov. 21 approached, they dreaded going from the first after to the second. They struggled over what to call it. “Anniversary” seems celebratory.

They considered going out of town but chose instead to pretend it was just another day.

Brittaney went to work, and Mollie kept herself busy trying to calculate where her son’s name would fall in a chronological list of the 70,237 dead in 2017: Some 62,400 died before him and some 7,600 after. She thought if she could turn it into a math problem, maybe it might make some sense, but it didn’t.

Doug carted the box of Landon’s ashes around with him. He sat it on his desk as he worked in his home office and put it in the passenger seat as he tooled around town running errands.

“I hung out with Landon today,” he told his family, before he put the box back on its shelf, in the living room, close by.