‘I can’t bring Alyssa back’: Grieving Parkland mom fights on

Alyssa Alhadeff’s mother keeps up a dizzying pace of advocacy, insisting that it helps her handle the grief

‘I can’t bring Alyssa back’: Grieving Parkland mom fights on 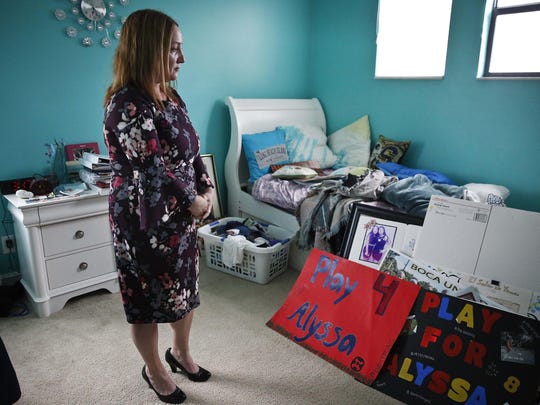 Lori Alhadeff, mother of 14-year-old Alyssa Alhadeff who was one of 17 people killed at Marjory Stoneman Douglas High School, stands in her daughter's bedroom on Jan. 30, 2019, in Parkland, Fla. Much of the teenager's turquoise-colored bedroom remains untouched. Her retainer is still there, as are mementos of teammates and friends. And her dirty clothes are still in the hamper by the bed. "I haven't washed them yet because it's too hard," her mother says, crying again. (Photo: Brynn Anderson / AP)

Parkland, Fla. – Every morning, Lori Alhadeff makes breakfast for her two boys, gets dressed and sprays on her daughter’s Victoria’s Secret perfume.

The scent is part of her armor, propelling her through her whirlwind of a day as she fields hundreds of emails and juggles two phones, a constant reminder of why she ran for and won a seat on the local school board, and started a foundation to make schools safer. Why she called out President Trump in a televised, gut-wrenching tirade.

“I smell Alyssa,” Lori Alhadeff says, “so I feel like she’s more a part of me.”

A year ago, 14-year-old Alyssa Alhadeff was one of 17 people killed by a gunman who stalked the halls of Marjory Stoneman Douglas High School. And now, her mother keeps up a dizzying pace of advocacy, insisting that it helps her handle the grief, though there is the sense that if she ever allowed herself to stop she would be swallowed whole by sorrow.

“For me, it’s honestly still 2/14/18,” she says, through tears that often come as she remembers her daughter. “It’s not really set in that this is a reality for me. I feel that Alyssa is still coming home. She’s at her soccer game and she’s still going to walk through this door.”

The day of the shooting

When word of the shootings spread on that Valentine’s Day a year ago, Lori rushed to the high school with her husband, Ilan, and best friend, Emily Price. Other students, running from the school, told them Alyssa had been shot.

They split up and went in vain to different hospitals, looking for Alyssa without success. The Alhadeffs spent an agonizing night at a hotel.

The next morning, morgue workers would not allow them to their see their daughter. All they would show them was a photo of Alyssa’s face.

“That’s when I knew with 100 percent certainty that Alyssa was killed,” her mother says.

Alyssa had tried to hide under a table in her English class. The gunman, armed with an AR-15 style semi-automatic rifle, sprayed bullets through a window; Alyssa was shot 10 times, in the heart, on the top of her head and in her femoral artery – her “soccer leg,” her mom says.

The Alhadeffs would finally be reunited with their daughter as they planned her funeral.

“Her body was really cold,” Lori Alhadeff recalls. She tried to warm Alyssa with her hands, “to bring her back to life.” She clipped locks of the girl’s long, brown hair, to keep.

Seething, she asked her husband to drive her to the park where students and media had gathered. She approached a line of reporters.

She did not know what to say. But she felt compelled to speak.

“A crazy person just walks right into the school, knocked on the window of my child’s door and starts shooting, shooting her and killing her,” she screamed. “President Trump, you say what can you do, you can stop the guns from getting into these children’s hands, put metal detectors at every entrance to the school.”

CNN captured the moment live; her rage was so overwhelming, her grief so palpable, that for a moment the shaken anchor struggled to speak. The outburst would be seen worldwide.

After the funeral, Alhadeff’s grief quickly turned to action.

A 44-year-old former teacher, Alhadeff started Make Our Schools Safe, aiming to harden schools against intruders and to train students and teachers so they know how to respond. Test scores don’t matter, she says, if kids don’t come home alive.

She and her husband marched with Parkland students in Washington, demanding gun control. And in May, she was elected to the school board.

“I have to keep pressing forward. I know that I can’t bring Alyssa back but … if I can change the life of one person … ,” she says, her voice trailing off in tears.

“There’s some days that I feel like staying in bed and not doing anything and it just feels like it’s the end of the world … (Lori) is able to draw strength from Alyssa on a daily basis and get up and be a force to be reckoned with,” Price says.

Ryan Petty, whose 14-year-old daughter Alaina died in the shooting, says Alhadeff isn’t afraid to demand answers from school administrators when other board members are too timid.

“The other board members need to have the courage to stand up and ask the tough questions that Lori has started to ask,” says Petty, who lost his own bid for the board.

Her fearlessness is out of character for the petite and normally reserved Alhadeff.

“That was Alyssa enabling me to use my voice,” she says.

Alyssa was in many ways a typical teenager. She loved boys and going to the beach. She excelled in math and Spanish, was a gifted writer and captain of her soccer team. She wasn’t afraid to speak her mind.

She didn’t have a boyfriend and wasn’t looking forward to Valentine’s Day. Lori knew that and tucked a pair of earrings and a chocolate bar in a gold bag for her. Alyssa was delighted and Snapchatted about it on the way to school before her mom dropped her off.

“I told Alyssa that I loved her,” she says. It was the last time she would see her daughter alive.

Reminders of Alyssa are everywhere: Photos of Alyssa along with her brothers, now 11 and 14. The silver heart necklace Lori wears, etched with a picture of mother and daughter. The stones painted with Alyssa’s name, leading up to the front door.

Much of Alyssa’s turquoise-colored bedroom remains untouched. Her retainer is still there, as are mementos of teammates and friends. Her yellow soccer jersey, No. 8, hangs on the wall. And her dirty clothes are still in the hamper by the bed.

“I haven’t washed them yet because it’s too hard,” her mother says, crying again.