The images of Simone Veil, who survived the Auschwitz death camp and went into politics in France, were defaced 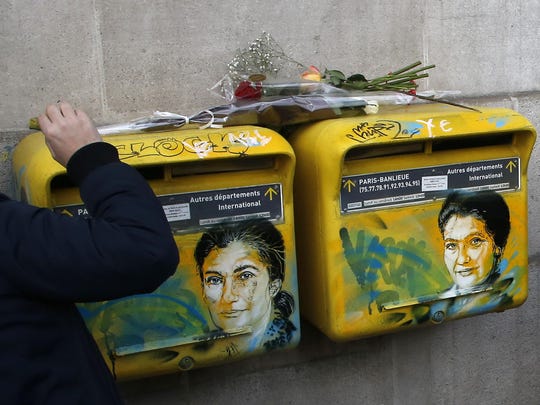 French street artist Christian Guemy, known as C215, cleans the vandalized mailboxes with swastikas covering the face of the late Holocaust survivor and renowned French politician, Simone Veil, in Paris, Tuesday Feb.12, 2019. According to French authorities, the total of registered anti-Semitic acts rose to 541 in 2018 from 311 in 2017, a rise of 74 percent. (Photo: Michel Euler / AP)

Paris – Street portraits of a prominent Holocaust survivor that were graffitied with swastikas have been restored by the artist who painted them on mailboxes in Paris.

The images of Simone Veil, who survived the Auschwitz death camp and went into government and politics in France, were found defaced near a town hall in the southeast of the French capital.

Veil died in 2017. The tagger of the mailboxes bearing her image has not been located.

Artist Christian Guemy, who also goes by the name C215, tweeted a photo of the restored portraits on Tuesday.

“Simone Veil is back … stronger than the barbarity of anonymous people,” Guemy wrote.

“We will be inflexible toward those who commit such acts,” Macron said.

According to French authorities, the total of registered anti-Semitic acts rose to 541 in 2018 from 311 in 2017, a rise of 74 percent. Properties associated with other religions also have been targeted.

Prime Minister Edouard Philippe condemned the vandalism of five churches last week and urged people in a country where secularism is written into the constitution.

“In our secular Republic, we respect the places of worship. These acts shock me,” he said.