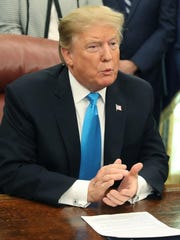 President Donald Trump speaks to the media before signing the Space Policy Directive 4, in this February 19, 2019, file photo. Trump could miss out on being on the 2020 ballot in New Jersey if he doesn’t disclose his tax returns under a bill now advancing. (Photo: Mark Wilson / Getty Images, file)

Trenton, N.J. – President Donald Trump could miss out on being on the 2020 ballot in New Jersey if he doesn’t disclose his tax returns under a bill now advancing.

The measure requires presidential and vice presidential candidates to release five years of federal tax returns to appear on the state’s ballot.

Trump broke with decades of tradition by refusing to release his income tax filings during his 2016 campaign. He said it was because he is being audited.

Democrats have used the issue to raise questions about what might be in the documents.

The bill goes to the Democratic-led Assembly. If the measure is passes there, it would head to Democratic Gov. Phil Murphy.