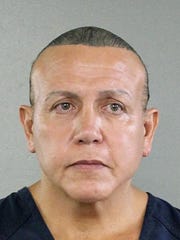 This Aug. 30, 2015, file photo released by the Broward County Sheriff's office shows Cesar Sayoc in Miami. Sayoc, who is charged with sending pipe bombs to prominent critics of President Donald Trump, is expected to plead guilty at a hearing in New York on Thursday, March 21, 2019. (Photo: AP, file)

A notice entered on the docket in the case of Cesar Sayoc shows that a hearing has been scheduled Thursday at the federal court in Manhattan for him to change his plea. The entry was made public Friday but was set following a phone conference between prosecutors, Sayoc’s lawyers and the judge on Wednesday.

Without a plea deal, Sayoc, 56, faced charges carrying a potential penalty of mandatory life in prison. The court filing didn’t indicate which charge or charges the plea would involve.

Sayoc was set to go to trial in July on charges he sent 16 improvised explosive devices through the U.S. mail to victims across the country. None exploded.

The charges said he aimed to “kill, injure and intimidate an individual and unlawfully to damage and destroy a building, vehicle, and other real and person property.”

Sayoc has been held without bail since his late-October arrest outside a South Florida auto parts store. He had been living in a van covered with stickers of Trump and showing images of some Trump opponents with crosshairs over their faces.

In the indictment, prosecutors noted that an improvised explosive mailed to Clinton in Chappaqua, New York, contained a picture of her and members of her family marked with a red “X.”

The indictment said others targeted by the mailings received similarly marked pictures of themselves along with the explosives.

Prosecutors say evidence against Sayoc includes DNA linking him to 10 of the explosive devices and fingerprints on two of them.