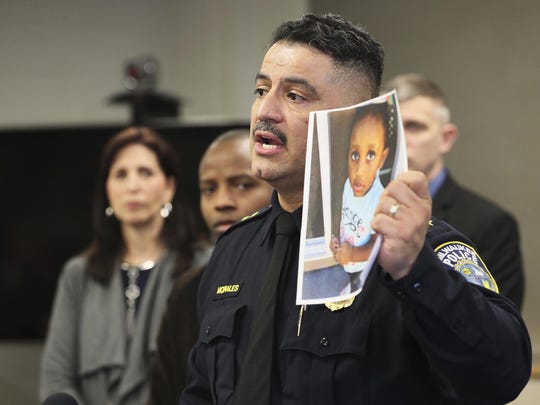 In this Friday, March 15, 2019, photo, Milwaukee Police Chief Alfonso Morales holds a photo of 2-year-old Noelani Robinson as he speaks at a news conference at the Police Administration Building in Milwaukee. (Photo: Michael Sears / AP)

Milwaukee – Cash bond is set at $1 million for a 34-year-old man accused of killing a missing girl’s mother in Milwaukee.

Higgins is the father of 2-year-old Noelani Robinson. Authorities say a child’s body found wrapped in a blanket along a southern Minnesota highway on Friday night is believed to be Noelani’s.

The Minnesota Bureau of Criminal Apprehension says the child died from blunt force trauma to the head. That death remains under investigation.

Authorities have not disclosed a motive in the death of Sierra Robinson. Police said Higgins was Robinson’s pimp and they had been romantically involved but were no longer together.