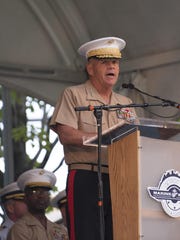 General Robert Neller, Commandant of the United States Marines Corps and a Michigan (Lansing) native, gives a speech during the opening ceremony for Marine Week Detroit at Campus Martius Park in this September 6, 2017, file photo. Neller said in a memo this week to the Navy secretary that the Marines have pulled out of three military exercises and cut equipment maintenance. (Photo: John T. Greilick / Detroit News, file)

Washington – A number of unexpected costs, including major hurricane damage repairs and unplanned deployments to the U.S.-Mexico border, are forcing the Marine Corps to cancel training exercises and will degrade combat readiness, the top Marine general warned.

Gen. Robert Neller said in a memo this week to the Navy secretary that the Marines have pulled out of three military exercises and cut equipment maintenance. And he warned that Marine participation in more than a dozen other exercises will also be canceled or reduced and other cuts will be needed if the service doesn’t get budget help.

“Marines rely on the hard, realistic training provided by these events to develop the individual and collective skills necessary to prepare for high-end combat,” Neller said in the memo sent to Navy Secretary Richard Spencer. “Although some effects can be mitigated, the experience lost by these units at a critical time in their preparation cannot be recouped.”

In the memo, which was first reported by the Los Angeles Times, Neller asks Spencer for help getting funding freed up for the Marine priorities.

Neller lists nine unplanned factors that led to the problem, but the Marine Corps said that, by far, the most significant issue forcing the training cuts is the widespread hurricane damage.

About $3.5 billion in damages was done to Camp Lejeune in North Carolina and surrounding facilities by Hurricanes Florence and Michael.

Neller said that earlier hopes that Congress might approve requests to move larger amounts of money around in the budget now appear unlikely. He called the situation in North Carolina critical, noting that hurricane season begins in June and Marines and sailors are working in “compromised structures” that must be repaired quickly.

The Defense Department is seeking more than $2 billion in funding for hurricane damage in the 2020 fiscal year budget. But Neller said the Marine Corps needs more than $600 million in this current fiscal year to do those needed repairs and address other shortfalls.

The other shortfalls include the ripple effect of the ongoing debate over President Donald Trump’s plan to build a wall on the southern border.

Currently there are about 500 Marines deployed to the border mission, where U.S. service members are helping in wall construction, transportation, surveillance and other tasks requested by the Department of Homeland Security.

In addition, the Pentagon is shifting funding from various department budget accounts to pay for the wall construction costs.

Other cost issues, Neller said, include an unbudgeted civilian pay raise, unfunded increase in Marine deployment to Australia and unplanned cuts in funding for the Marine Reserve.

His memo got quick backing from a key Congress member.

“President Trump should stop treating the Pentagon as a piggybank for his misguided domestic policy aims,” said Sen. Jack Reed of Rhode Island, the ranking Democrat on the Senate Armed Services Committee. “President Trump has ignored the facts, ignored the experts, and ignored a big bipartisan vote against his views on border security. I hope he doesn’t try to ignore this memo.”