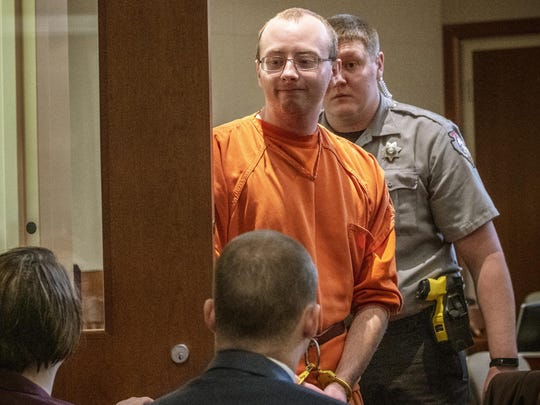 Patterson had said he would plead guilty in a letter sent earlier this month to a Minneapolis TV station, saying he didn’t want the Closs family “to worry about a trial.”

Patterson admitted kidnapping Jayme after killing her parents, James and Denise Closs, on Oct. 15 at the family’s home near Barron, about 90 miles (145 kilometers) northeast of Minneapolis. Jayme escaped in January, after 88 days in Patterson’s cabin in near the small, isolated town of Gordon, some 60 miles (97 kilometers) from her home.

According to a criminal complaint , Patterson told authorities he decided Jayme “was the girl he was going to take” after he saw her getting on a school bus near her home.

Jayme told police that the night of the abduction, the family dog’s barking awoke her, and she went to wake up her parents as a car came up the driveway. While her father went to the front door, Jayme and her mother hid in the bathroom, clutching each other in the bathtub, with the shower curtain pulled shut.

They heard Jayme’s father get shot. Patterson then found Jayme and her mother. He told detectives he wrapped tape around Jayme’s mouth and head, taped her hands behind her back and taped her ankles together, then shot her mother in the head. He told police he dragged Jayme outside, threw her in the trunk of his car, and took her to his cabin, the complaint said.

During Jayme’s time in captivity, Patterson forced her to hide under a bed when he had friends over and penned her in with tote boxes and weights, warning that if she moved, “bad things could happen to her.” He also turned up the radio so visitors couldn’t hear her, according to the complaint.

Authorities searched for Jayme for months and collected more than 3,500 tips. On Jan. 10, Jayme escaped from the cabin while Patterson was away. She then flagged down a woman who was out walking a dog and pleaded for help. Patterson was arrested minutes later.