Most Americans got a Trump tax cut, most didn’t notice

Most Americans got a Trump tax cut, most didn’t notice 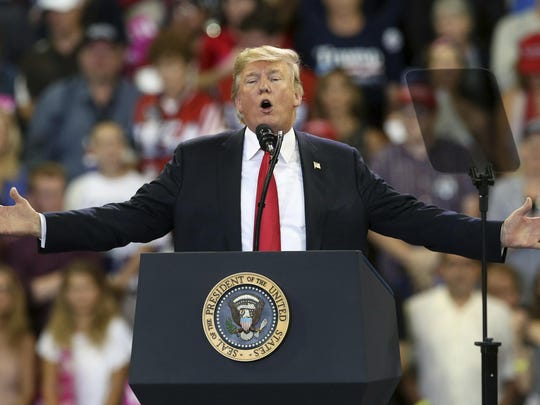 In this June 20, 2018 file photo, Donald Trump speaks at a campaign rally in Duluth, Minn. Trump heads back to Minnesota on the nation's tax filing deadline, Monday, April 15, 2019, eager to remind voters in a state he nearly carried in 2016 about the $1.5 trillion Republican tax cut. It's a policy achievement that won't resonate with everyone in Minnesota, where the loss of the state tax deduction hurt some taxpayers. And national polls show most Americans don't have a clear idea what the tax cuts did for them. (Photo: Jim Mone / AP, file)

Republicans passed a sweeping tax cut for two-thirds of Americans in 2017, saying it would pay for itself and the American public would thank them.

Now, as Americans finish filing to the IRS for the first time under the new system, the law has swelled the deficit and surveys show just one-fifth of taxpayers believe their taxes have gone down. That’s made it hard for President Donald Trump to leverage the tax cuts as an issue in 2020, when he’s up for re-election and his party will be seeking to retake the House of Representatives.

“The Democrats really outmaneuvered the Republicans by convincing the American people that the main thrust of the tax reform package was to cut taxes for the wealthy,” said Dan Eberhart, a major Republican donor who runs the drilling services company Canary, LLC. Republicans “failed to fully explain the success to voters.”

Trump is going to try again on Monday when he goes to Minnesota, a potential swing state in the 2020 election, to promote what Republicans consider their signature legislative achievement. It’s part of a week of events designed to promote the tax law’s effects on the economy as he turns to his next campaign.

The Trump administration and congressional Republicans sold the tax law as fuel for economic growth and deficit reduction. Senate Majority Leader Mitch McConnell gave assurances in December 2017 that the measure would not only contain the deficit but be a “revenue-producer.” Trump’s top economic adviser, Larry Kudlow, said last week that the tax cut package had largely already paid for itself, a statement that conflicts with government data.

The U.S. budget shortfall grew by 17 percent to $779 billion in fiscal year 2018, which the Congressional Budget Office has said was partly a consequence of the tax law. Along with additional spending that’s been signed into law, the CBO projects the deficit will surpass $1 trillion by 2020.

When the law passed, McConnell said, “If we can’t sell this to the American people, we ought to go into another line of work.” He added that the GOP merely needed to tell the public “that you have more money in your pocket.”

However, since the tax cut passed, the White House has been more cautious in citing just how big a cut Americans will receive. The Trump administration said Monday that the average family of four with an income of $75,000 will get a $2,000 tax cut. Before the law was enacted, the White House Council of Economic Advisers estimated that the average household income would increase by at least $4,000 annually thanks to the tax law. They didn’t specify the size of the household.

But an NBC/Wall Street Journal poll this month showed that just 17 percent of Americans believe their taxes have been cut. A Reuters/Ipsos poll in March found that 21 percent thought their taxes were lowered.

That’s despite an analysis by the nonpartisan Tax Policy Center that two out of three taxpayers would see their taxes go down. The biggest benefits, though, go to the top 1 percent, who are projected to receive an average tax break of $62,000 in 2018, while the middle one-fifth of income earners got an average tax cut of $1,090 about $20 per week.

The law appears to have met a similar political fate as President Barack Obama’s stimulus package in 2009, in which most Americans received a one-year tax break but the incremental gains in paychecks were so small that most didn’t notice.

Eberhart said the Trump administration wanted “an immediate reaction” so it reduced the amount the IRS withholds from regular paychecks starting in 2018.

The move backfired. “It was too small an amount for most to notice,” he said. Adding to voters’ frustration, their tax refunds were smaller than expected, down about 1.1 percent overall, but still noticeable to individual households.

White House economic adviser Kevin Hassett on Friday dismissed poor poll results, saying that they might be explained by general frustration with the tax system broadly. He cited other data, such as the Michigan survey of consumer sentiment, that “suggest that you should have a very optimistic outlook for economic growth this year."

The tax law, passed by Republicans without any Democratic support, lowered the corporate rate from 35 percent to 21 percent and cut individual taxes across income brackets for eight years. It doubled the standard deduction and enhanced the child tax credit. And it closed or tightened various tax breaks most notably by capping the amount of state and local taxes that can be deducted which had its biggest impact on residents of high-tax, largely Democratic-run states.

There’s “no question” that the advantages for businesses from the tax plan have just begun to kick in, Treasury Secretary Steven Mnuchin told Fox Business Monday. He said those benefits will become more apparent over the next few years.

Democrats spent their 2018 midterm campaigns hammering the law as a giveaway to wealthy Americans that would widen the deficit and put popular programs like Social Security and Medicare on shaky ground. A Republican-commissioned poll before the election found that message to be effective.

Ryan Ellis, a conservative tax lobbyist, blamed negative news coverage for the unpopularity of the tax law. "People don’t know about their own taxes," he said, adding that they "get half baked ideas" from the way the law is portrayed.

Republicans didn’t understand what the broader public wanted from a tax bill, said Morris Pearl, a former managing director at BlackRock Inc., who now chairs Patriotic Millionaires, a group of wealthy individuals who advocate for higher taxes on the rich.

“They forgot that the people who show up at their $1,000-a-plate fundraisers are not representative of all people,” Pearl said. “They overreached with their tax bill and tilted the system in the favor of the very wealthy and large corporations.”

The tax effort stemmed from the bipartisan desire to move the U.S. corporate tax system in line with those of foreign competitors. Both parties supported lowering the country’s 35 percent corporate rate, though Democrats favored a more modest reduction.

Republicans realized that corporate tax cuts were a hard sell to the general public. So they reduced levies for pass-through businesses – partnerships and limited liability companies – and individuals, eliminated some existing tax breaks to offset the rate reductions and included a more generous child tax credit.

But because of earlier unpopular proposals like one to cut deductions for medical expenses, college tuition and child-adoption costs, public opinion had already soured – for good.

In many Democratic strongholds, such as New Jersey, New York and the District of Columbia, the average refund amount decreased, according to H&R Block, fueling discontent with the law, even though residents in those locations got a tax cut on average.

Worse, new deduction limits for state and local taxes, or SALT, really stung. Residents of high-tax states, encouraged by the elected Democratic officials, came to believe they were targeted to pay for the $1.5 trillion tax cut, even if they weren’t able to personally use the deduction.

"It is clear that they consciously exacted revenge on Democratic states like New York, California, New Jersey, Massachusetts, and Illinois by capping the SALT deduction, which is bad news for residents in those states," said Representative Tom Suozzi, a New York Democrat.

With assistance from Justin Sink.