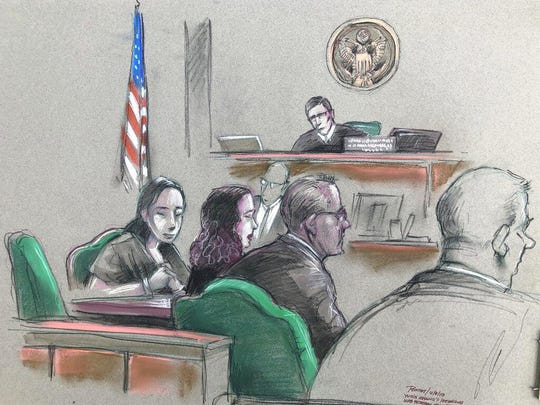 In this artist sketch, a Chinese woman, Yujing Zhang, left, listens to a hearing Monday, April 8, 2019, before federal Magistrate Judge William Matthewman in West Palm Beach, Fla. Secret Service agents arrested the 32-year-old woman March 30 after they say she gained admission by falsely telling a checkpoint she was a member and was going to swim. (Photo: Daniel Pontet / AP, file)

West Palm Beach, Fla. – A federal judge denied bail Monday for a Chinese woman charged with lying to illegally enter President Donald Trump’s Mar-a-Lago club, saying her actions and statements suggest “she was up to something nefarious” and there is an “extreme risk of flight” if she were released.

Federal Magistrate Judge William Matthewman issued the ruling for 33-year-old Yujing Zhang, who pleaded not guilty Monday to charges of lying to federal agents and illegal entering of a restricted area. Zhang faces up to five years if convicted. Prosecutors did back away from their previous contention that Zhang was carrying a computer thumb drive containing malware, saying further tests have put that in doubt.

Matthewman said he was particularly concerned that when Secret Service agents questioned Zhang on March 30 at Mar-a-Lago shortly after she gained admission, the defendant said she was carrying four cellphones, a laptop and an external hard drive because she feared they would be stolen if she left them in her hotel room. But during a search of her room later, agents found more electronics gear – including a device to detect hidden cameras – $8,000 in cash and numerous credit and debit cards, all of it unsecured.

“It does seem to the court that her alleged innocent explanation is refuted by what she left behind,” Matthewman said. “It does appear to the court that Ms. Zhang was up to something nefarious … when she gained access to Mar-a-Lago.”

Because of that, Matthewman said he feared that if he allowed Zhang to be released, she would flee back to China. The U.S. and China do not have an extradition treaty. Zhang is not charged with espionage, but prosecutor Rolando Garcia said the investigation remains active. Even if Matthewman had decided to grant bail, immigration officials would most likely have detained Zhang because her U.S. visa has been revoked. Zhang showed no reaction throughout the hearing except for once saying she didn’t understand when Garcia said she was at times “within an arm’s length” of Mar-a-Lago computers.

One of Zhang’s public defenders, Kristy Militello, told Matthewman she believes that Zhang, who works as a business consultant, was confused by the agents’ questions and they misunderstood her when they say she said she was a member. Zhang speaks English, but her level of expertise is disputed by the prosecution and defense. During court hearings, she listened to a Mandarin translator but also spoke directly to her attorneys occasionally.

Militello said Zhang had come to Mar-a-Lago believing there would be a dinner that evening for a United Nations group, part of a $20,000 travel package she had purchased from a man named “Charles” she only knew through social media. Militello pointed to a receipt Zhang received from Charles Lee, a Chinese national who promotes such events at Mar-a-Lago, and a flyer she had promoting it. She requested Zhang be released on $250,000 bail secured by her father and said she would wear a monitoring device to ensure she didn’t leave the area.

“It is a sad fact of this case that if a Mandarin interpreter was provided at that first contact with the Secret Service, we very well may not be here,” Militello told Matthewman. She said Zhang cooperated with agents, followed their directions, allowed her belongings to be searched and sat through nine hours of questioning.

Lee ran the United Nations Chinese Friendship Association and was photographed at least twice with Cindy Yang, a Republican donor and former Florida massage parlor owner. Yang recently made news after it was learned she was promising Chinese business leaders that her consulting firm could get them access to Mar-a-Lago, where they could mingle with the president.

Yang previously owned a spa where New England Patriots owner Robert Kraft was charged with soliciting prostitution. Kraft has pleaded not guilty, but also apologized for his behavior.

Garcia told Matthewman that a search of Zhang’s phones showed Lee told her on March 26, two days before she flew from Shanghai to the United States, that the Mar-a-Lago event was canceled and she acknowledged receipt, asking him why. Garcia did not say if Lee responded.

An agent told Matthewman last week that when an analyst uploaded the possible malware found on Zhang’s thumb drive, it immediately began installing and corrupting his computer’s files. Garcia said Monday that further analysis has not been able to replicate that action, so there are now doubts about whether it contained malware. He said further tests are being conducted.

No trial date for Zhang has been set. There is no indication Zhang was ever near the president, who was at his nearby golf club when she arrived.

This story has been edited to correct that Zhang’s visa was revoked, instead of expired.