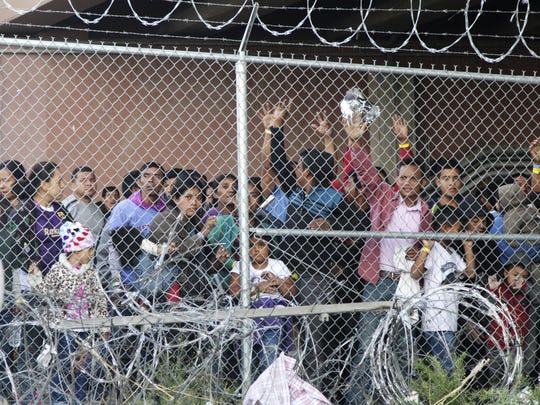 In this March 27, 2019, file photo, Central American migrants wait for food in a pen erected by U.S. Customs and Border Protection to process a surge of migrant families and unaccompanied minors in El Paso, Texas. A federal advisory group is calling for significant changes to how the federal government deals with the surge of migrant families that officials say is overwhelming the southern border. (Photo: Cedar Attanasio / AP, file)

Washington – A federal advisory group is calling for significant changes to how the federal government deals with the surge of migrant families that officials say is overwhelming the southern border.

In a draft report unveiled Tuesday, a committee of the Homeland Security Advisory Council called on the Trump administration to immediately establish three to four regional migrant processing centers along the southwest border with Mexico. The bipartisan group also endorsed changes to an agreement that generally bars the government from keeping children in immigration detention for more than 20 days.

The report comes as border officials say they are struggling to cope with an influx of Central American families, with U.S. Border Patrol apprehending a record-setting 53,000 families in March.

“There is a real crisis at our border,” say the authors, who include immigration experts, lawyers, former federal officials and a medical doctor. “An unprecedented surge in family unit migration from Central America is overwhelming our border agencies and our immigration system. This crisis is endangering children.”

The report calls for the establishment of new centers where migrant families would be processed by immigration officials, receive medical care and have their asylum cases heard by immigration judges. And they want to see a similar processing center established in Guatemala, near that country’s border with Mexico, so migrants can make asylum claims without having to make the dangerous trek to the U.S.

The report also calls for changes to a court settlement that would allow authorities to hold minor children who enter the country with guardians for longer than 20 days and changes that would allow border agents to take photographs and collect the biometric data of children under 14 “in order to stem the recycling of children at the border and to rapidly determine the legitimacy of parentage claims,” among other measures.

It is unclear whether the Trump administration will consider any of the changes it is not already pushing Congress to undertake. The administration supports asylum changes and other steps to slow the influx of migrants at the border as President Donald Trump tries to make good on his 2016 campaign promises and energize his base going into 2020.

But Katharina Obser of the Women’s Refugee Commission said many of the ideas in the report would only exacerbate the problem.

“It is long overdue for the government to invest its existing funds in a comprehensive, legal and humane approach to protection at our borders,” she said, but many of the report’s recommendations “would do little to better care for vulnerable families and children seeking protection in the United States.”

If implemented, the recommendations could “exacerbate the situation at the border, further traumatize and endanger families and children and betray our legal and moral obligations to ensure access to a safe and fair asylum process,” she said.