Video released of suspect in 2017 killings of Indiana girls

Video released of suspect in 2017 killings of Indiana girls

Indianapolis – Authorities on Monday released video of a man suspected of killing two Indiana teenagers two years ago and urged the public to scrutinize the footage, which shows him walking on an abandoned railroad bridge the girls visited while out hiking the day they were slain.

The Indiana State Police also released a new sketch of the suspect, which State Police Superintendent Doug Carter said was produced thanks to “new information and intelligence” collected during the investigation into the February 2017 killings of 14-year-old Liberty German and 13-year-old Abigail Williams. 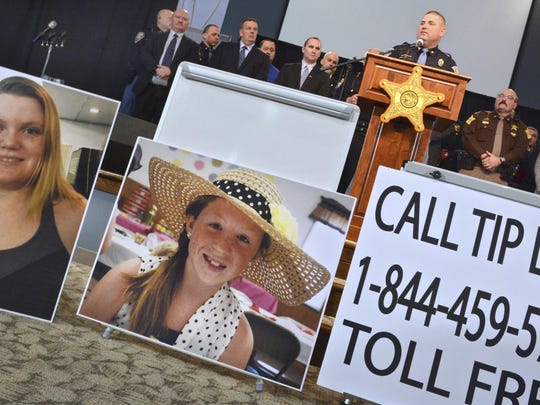 During a briefing in the girls’ hometown of Delphi, he said a previously released composite sketch that depicted a white man with a goatee, cap and hooded sweater is now secondary to the new sketch, which shows a clean-shaven, younger looking man.

Investigators still haven’t said how the teens were killed, and they declined to take questions at Monday’s briefing. Carter said investigators believe the suspect is between the ages of 18 and 40, and that he either lives or lived in Delphi or regularly visits or works in the area. He vowed that police will solve the case and he addressed the suspect directly during the briefing.

“We believe you are hiding in plain sight. For more than two years, you never thought we would shift gears to a different investigative strategy, but we have,” he said.

In this undated police artist sketch provided by the Indiana State Police is the new "face" of the Delphi Murder suspect Monday, April, 22, 2019. (Photo: AP)

Carter also taunted the suspect, calling him “a coward” and saying authorities have likely already interviewed him or someone close to him. He also suggested that the man’s friends or family might suspect that he killed the girls “because of how different you are since the murders.”

“The question to you: What will those closest to you think of when they find out that you brutally murdered two little girls? Two children. Only a coward would do such a thing,” Carter said.

The brief video of the suspect and additional audio that was also released Monday came from German’s cellphone, from which police previously released grainy photos and audio. Authorities have hailed German as a hero for recording potentially crucial evidence before she was killed.

Carter urged the public to pay close attention to the mannerisms of the man in the video, which shows him walking across an abandoned railroad bridge near Delphi, which is about 60 miles (95 kilometers) northwest of Indianapolis.

“Do you recognize the mannerisms as being someone you might know? And remember, he is walking on the former railroad bridge, and because of the deteriorated condition of the bridge the suspect is not walking naturally, due to the spacing between the ties,” he said.

This composite sketch released July 17, 2017, by the Indiana State Police shows the man they consider the main suspect in the killings of teenage girls Liberty German, and Abigail Williams who disappeared from a hiking trail near their hometown of Delphi on Feb. 13, 2017. (Photo: AP, file)

Police also requested the public’s help in determining the identity of a motorist who had parked a vehicle along a county road in Delphi near the Hoosier Heartland Highway between noon and 5 p.m. on Feb. 13, 2017 – the day the girls were slain.

The girls’ bodies were found the following day in a rugged, wooded area about a quarter-mile from the bridge, which is near a local trail network the girls had planned to explore.

Carter asked the media not to contact the girls’ relatives for at least two weeks, saying they had only learned of the new evidence Monday morning.

Within days of the killings, investigators released two grainy photos of a suspect walking on the bridge and an audio recording of a man believed to be him saying “down the hill.”

The audio clip released Monday includes that same audio but is longer and captures the suspect saying, “Guys, down the hill,” said Sgt. Kim Riley with the State Police.

Investigators have reviewed thousands of leads looking for the man, but no arrest warrants have been issued and no arrests have been made.

Police might be releasing the video and additional audio now – more than two years after the killings – because of the time-consuming work that’s often involved in enhancing digital evidence, said Kathy Guider, a former FBI agent who is now vice president of Veracity IIR, a Carmel, Indiana, security company.

Guider, who isn’t affiliated with the case, said that by speaking directly to the suspect and taunting him during the briefing, police might be trying to provoke an emotional response from the killer that could cause him to make a misstep. She said authorities have used such an approach in several high-profile murder cases.