Putin says he’ll brief US on summit with Kim

Putin says he’ll brief US on summit with Kim 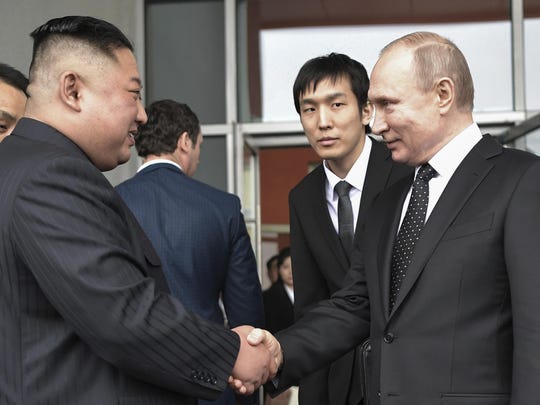 The two leaders’ first one-on-one did not indicate major changes in North Korea’s position: Putin said Kim is willing to give up nuclear weapons, but only if he gets ironclad security guarantees.

However, Putin said Kim urged him to explain the nuances of North Korea’s position to President Donald Trump. Such an interlocutor role could be meaningful in light of Trump’s apparent admiration of the Russian leader.

Trump has said he “fell in love” with Kim, possibly indicating a proclivity to being swayed toward accommodation with the North Korean leader, although that declaration came before the Trump-Kim summit in Hanoi in February that collapsed in disagreement.

After Thursday’s summit in the Pacific port city of Vladivostok, about 75 miles (120 kilometers) from the North Korean border, Putin stressed that Moscow and Washington both want North Korea to abandon its nuclear weapons. But, he said, the security guarantees Kim demands in exchange should be underwritten by multiple countries, hinting at an arrangement like the six-nation talks Russia participated in until their collapse in 2009. 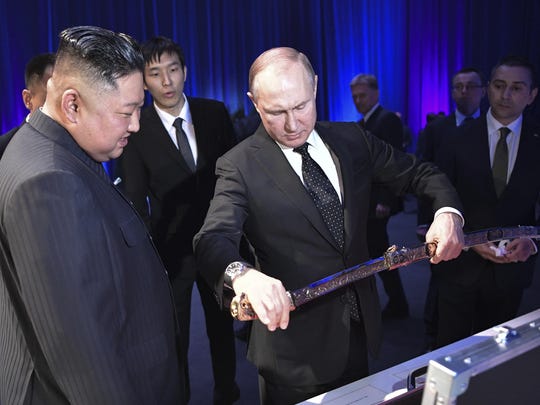 Putin later headed for a two-day trip to Beijing, where he said he will inform the Chinese leadership about the summit.

“And we will just as openly discuss this issue with the U.S. leadership,” Putin said. “There are no secrets. Russia’s position always has been transparent. There are no plots of any kind.”

But his characterization of Kim’s comments also suggests there have been no major changes in North Korea’s basic position.

North Korea has all along contended that it needs its nuclear arsenal to defend itself against what it sees as U.S. hostility and wants concrete reassurances of its safety – including the removal of the American nuclear threat as an integral part of the denuclearization of the entire Korean Peninsula.

Trump has made clear that he is eager to work out a deal with North Korea and has already indicated that he thinks he deserves the Nobel Peace Prize. Russia’s involvement in the issue could bolster his confidence, though some analysts think Washington and Moscow are too far estranged.

“For Russia, I don’t think it will deliver any leverage with the U.S. simply because the relations between Russia and the United States are at such a low level,” Vasily Kashin, a researcher at Russia’s Higher School of Economics, told The Associated Press.

Leonid Slutsky, chairman of the foreign affairs committee in the lower house of the Russian parliament, saw the summit as burnishing Russia’s credentials.

“The fact that Kim Jon Un asked Vladimir Putin to brief the Chinese and U.S. leadership on the results of the summit attests to Russia’s significant role as a guarantor of security in the Asia-Pacific region,” he was quoted as saying by state news agency Tass.

It wasn’t immediately clear what other agreements the leaders might have struck.

Along with a statement of political support, Kim was believed to be looking for some kind of economic support and possibly even a workaround to sanctions that will force more than 10,000 North Korean laborers in Russia to leave by the end of the year. The laborers are a major source of income for Pyongyang.

Putin said they discussed the issue and would find a solution taking into account “humanitarian” factors, though he didn’t say what that would be.

On the economic front, both sides share an interest in enhanced cooperation if sanctions are eased.

Russia would like to gain broader access to North Korea’s mineral resources, including rare metals. Pyongyang, for its part, covets Russia’s electricity supplies and investment to modernize its dilapidated Soviet-built industrial plants, railways and other infrastructure.

For Putin, the summit was also seen as an opportunity for Russia to emerge as an essential player in the North Korean nuclear standoff.

Moscow has kept a relatively low profile as Kim embarked on what has been an audacious diplomatic journey over the past year.

The Putin summit follows four summits with Chinese President Xi Jinping, three with South Korean President Moon Jae-in and two with Trump. Despite the current stalemate, Trump has said he would like to meet Kim again.

Moon said Thursday he will try to hold a fourth summit with Kim and facilitate the resumption of U.S.-North Korea talks.

Since Kim’s latest talks with Trump, in Hanoi, ended without any sign of progress, North Korea has expressed its open anger with what it calls an excessively hard-line position by Trump’s top advisers in the deadlocked negotiations.

Last week, it demanded U.S. Secretary of State Mike Pompeo be removed from the talks and strongly criticized national security adviser John Bolton. There have been reports that Kim has done some internal shaking up as well, possibly firing one of his own main negotiators.

Though Kim appeared confident and respectful as he and Putin met for the first time, he comported himself formally – creating a scene reminiscent of old Soviet-style meetings and a sharp contrast with his more cordial summits with Moon and, at times, even Trump.

Moscow was part of six-nation talks on the North Korean standoff that fell apart after Pyongyang’s withdrawal in 2009. Putin said Thursday he wasn’t sure if the talks could be revived, but he emphasized that international involvement will be needed to discuss guarantees for Pyongyang.

Vladivostok, a city of more than half a million on the Sea of Japan, faced gridlock on its roads as traffic was blocked in the city center due to Kim’s visit. The authorities also temporarily closed the waters around Russky Island to all maritime traffic.

Kim was expected to return to Pyongyang on Friday.