“Maya Chapin is part of my family now,” said Pedro Chilel, 21, who was abandoned by his parents before traveling to the U.S. alone at 17 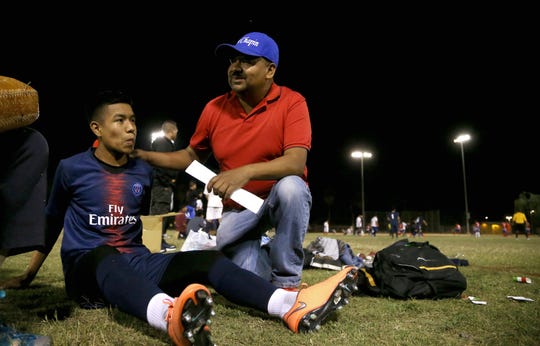 Phoenix – Antonio Velasquez smiled proudly at the wiry teenagers shouting in Spanish and the Mayan language Mam as they kicked a soccer ball under an evening desert sky turning to orange.

The Pentecostal pastor was a teenager in 1990, fleeing Guatemala’s civil war when smugglers randomly dropped him and other teens near Phoenix, where he initially worked in agriculture and lived in a trailer with others from the western highlands.

Nearly three decades later, Velasquez is an influential leader in Phoenix’s migrant community through the self-supporting soccer organization he founded, Maya Chapin. Bringing together 108 teams with 10,000 players mostly from Guatemala, the group aims to keep young migrants away from drugs and gangs while providing the guidance Velasquez lacked as a new arrival.

Guatemalans now surpass Mexicans as the top nationality for migrants apprehended at the southwest U.S. border. According to U.S. Border Patrol statistics, 90,477 Guatemalans traveling in families were apprehended at the border in the six-month period ending March 31, compared with 72,728 people traveling in families from Honduras, 17,396 from El Salvador and 1,573 from Mexico.

“Like us, a lot of people are leaving now because of a lack of opportunities, the extreme poverty, the insecurity,” Velasquez said, inflating a soccer ball with a portable pump. “These young people are just looking for a better life.”

In Arizona, most of the Guatemalan families now being released continue on to relatives in California, New York and elsewhere. But Velasquez said many with family around Phoenix have shown up at the soccer fields, with 150 new arrivals ages 15 to 18 joining Maya Chapin’s ranks in the first quarter of 2019.

Velasquez said Maya Chapin also helped place 18 migrant families without U.S. relatives into the homes of Phoenix-area Guatemalans from the same towns while they await court hearings on their cases. Many players at a recent practice were from Ixchiguan, where violence has erupted over opium crops linked to Mexican drug cartels. They all told of extreme poverty and brutality in a small nation known for coffee, volcanoes and an internal conflict that lasted 36 years.

Pedro Chilel, 21, abandoned by his parents in Guatemala before he traveled alone to the United States at age 17, ties his shoes before his Maya Chapin soccer league game Wednesday, April 17, 2019, in Phoenix. (Photo: Ross D. Franklin, AP)

Maya Chapin is similar to soccer groups Mexican migrants have formed in California and other states for decades. In Orange County, boys 17 and younger play for Monarcas Santa Ana, named for a professional team in Michoacan state.

In Oakland, migrant youth seek solace in Futbolistas 4 Life, a soccer program recently highlighted in a documentary following two migrant teens in the U.S. under the Deferred Action for Childhood Arrivals program, or DACA.

As Guatemalans and other Central Americans flood to the U.S.-Mexico border, those who study migrants here say groups like Maya Chapin and Futbolistas 4 Life provide support and solidarity for young people arriving in the United States alone or with families.

“Such associations have long been an organizing principle for a lot of these migrant communities,” said Kathleen Newland, a co-founder of the Migration Policy Institute in Washington who has long studied diaspora communities in the U.S. “They keep kids out of trouble and give them a constructive activity that provides a sense of identity.”

As is common in Guatemalan indigenous communities ravaged by alcoholism, Pedro Chilel, 21, was abandoned by his parents before traveling to the U.S. alone at 17. He now lives in Phoenix, where he has permanent U.S. residency, a landscaping job and a sense of community he lacked in his village of Mirador.

“It’s really fun to play,” Chilel said at a recent soccer practice. “I have two much older brothers here, but Maya Chapin is part of my family now.”

The bulge of an electronic ankle monitor – worn in some cases by people awaiting immigration hearings – was visible under a sock worn by player Adelfo Guillermo Martin Perez, who arrived here four months ago with his 4-year-old daughter. His wife followed with their 1-year-old last month.

“I’m trying to get permission to work,” said the 24-year-old, whose two brothers have lived in Phoenix for years. 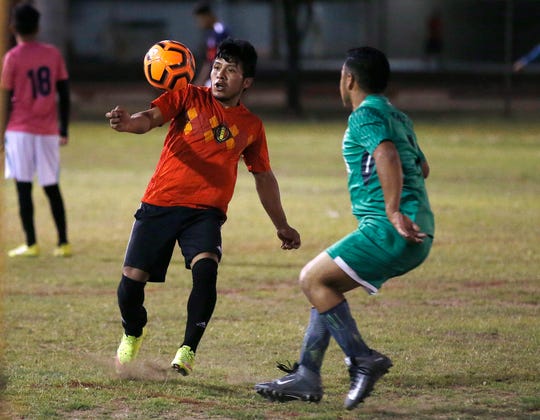 Velasquez said all Maya Chapin’s players have gone through U.S. immigration processing and include DACA program participants, people with or seeking asylum and U.S. citizens born on American soil. Players must be at least 15, but some are in their late 20s and older.

The pastor himself was granted a highly publicized reprieve from deportation two years ago, but he would not discuss his current immigration status. ICE spokeswoman Yasmeen Pitts O’Keefe said she also could not comment.

A married 47-year-old father of three U.S.-born children, Velasquez is well-known among some 15,000 Guatemalan-born people living in greater Phoenix and has deep ties to the broader community. He attends a regular Spanish-language City Hall prayer group and is a Mam interpreter for police. Last year, he delivered a memorial wreath to the state Capitol for Sen. John McCain, whom he credited with bringing a Guatemalan consulate to Phoenix.

“Antonio really is a servant-leader,” said City Councilman Michael Nowakowski. “He wants to help people and wants nothing in return.”

Nowakowski met the pastor more than a decade ago, before Velasquez learned how to reserve city soccer fields. After reservation holders repeatedly kicked his players off the fields, Velasquez established a standing reservation for weekly practices and games.

Velasquez said the players’ families buy their matching soccer jerseys and share the $7,000 cost of using the fields and lighting each season. When players cannot afford uniforms, other families pitch in.

“It’s incredible when you go out there and see anywhere from 200 to 800 people playing,” Nowakowski said.

While many praise Velasquez, he butts heads with others. He once launched a boycott against a Guatemalan chicken restaurant he said ignored the community, and he has irritated other migrant groups by refusing to join protests outside ICE offices. Velasquez says the demonstrations are counterproductive.

“In Guatemala, we have a saying: ‘People understand each other by talking,’” the pastor said. “Sometimes dialogue is better.”