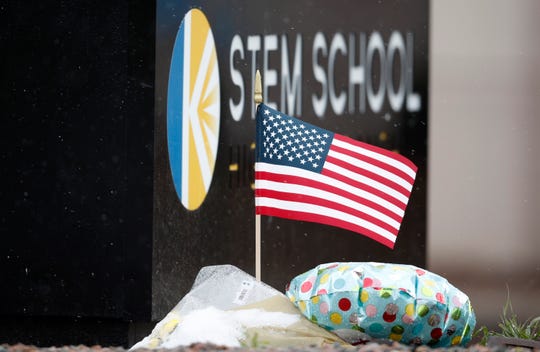 An American flag unfurls in the wind in a small tribute placed below the sign for STEM School Highlands Ranch following Tuesday's shooting, in Highlands Ranch, Colo., Thursday, May 9, 2019. (Photo: David Zalubowski, AP)

Denver – A security guard credited with capturing one of the two suspects in this week’s suburban Denver school shooting fired his weapon inside the school, a law enforcement official with knowledge of the case told The Associated Press on Thursday.

The security guard has not been identified but is a former Marine who has stayed out of the public eye since Tuesday, when two suspects opened fire at the STEM School Highlands Ranch, killing one student and injuring eight.

Two news organizations cited anonymous sources reported that authorities are investigating whether the guard mistakenly fired at a responding sheriff’s deputy and may have wounded a student.

The law enforcement official spoke to The Associated Press on anonymity because the official was not authorized to make information public. The official did not address whether anyone was hit by the security guard’s firing.

An attorney for the guard declined to directly answer questions Thursday about the media reports.

But the attorney, Robert Burk, said his client acted in the best interests of protecting the children at the school and helped resolve the situation without further bloodshed.

“He ran there as quick as he could and took what I think is decisive action that helped save lives,” Burk said.

Three students have been hailed as heroes for disarming one of the suspects during Tuesday’s shooting. One of them, Kendrick Castillo, was shot and killed during the struggle and a second, Joshua Jones, is recovering at home after being shot twice.

The security guard confronted and apprehended a suspect in a hallway, his employer, Grant Whitus of Boss High Level Protection, has said. Douglas County Sheriff Tony Spurlock previously said one of the shooters was being restrained by a private security guard when deputies arrived.

Burk said the security guard heard reports of gunfire over his radio and ran to the area as fast as he could. Burk would not describe what his client saw or did once he arrived, saying he did not want to interfere with the ongoing investigation.

But he said the guard, a Marine Corps veteran who was deployed to Afghanistan and previously worked for the Jefferson County Sheriff’s Office, was a hero.

“I know that he took action to protect the children and help resolve the situation without further bloodshed or violence and I don’t know of any facts to support anything that my client did that was legally wrong or wasn’t in the best interests of protecting the children,” Burk said.

Officials have identified the suspects as 18-year-old Devon Erickson and 16-year-old Maya McKinney, whose attorney said uses male pronouns and the name Alec.

The two allegedly walked into the school through an entrance without metal detectors and opened fire in two classrooms just miles away from Columbine High School and just weeks after the 20th anniversary of a massacre there.

Investigators have not offered a motive for the shooting. Erickson and McKinney are scheduled to appear in court Friday to hear the charges filed against them. 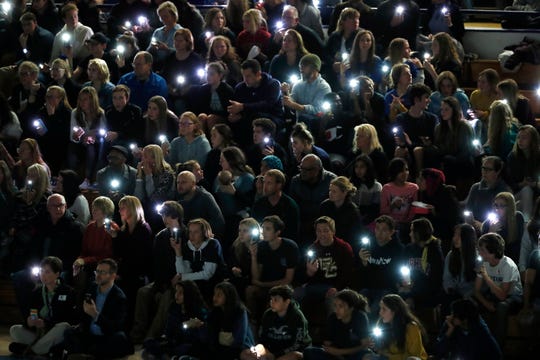 Attendees illuminate their mobile telephones during a community vigil to honor the victims and survivors of yesterday's fatal shooting at the STEM School Highlands Ranch, late Wednesday, May 8, 2019, in Highlands Ranch, Colo. (Photo: David Zalubowski, AP)

Castillo was remembered Wednesday night at a vigil that was hit by disruptions, with many students staging a walkout amid complaints the vigil had been politicized and failed to include their voices.

At one point, someone shouted that students should be allowed to speak, and organizers talked with students in a hallway about how to include them.

Some students chanted and others railed against the media and called for remembering Castillo. Students eventually were invited to speak.

Teacher Emily Muellenberg told Colorado Public Radio that organizers had reached out to students before the event but didn’t hear back.