How ‘lunch shaming’ is facing scrutiny around the U.S.

As the push against “lunch shaming” gains traction, here’s what you should know

How ‘lunch shaming’ is facing scrutiny around the U.S. 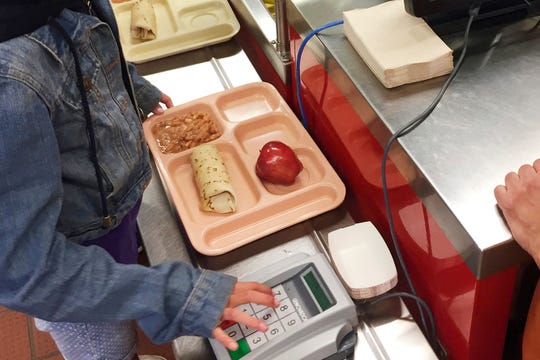 In this Thursday, May 4, 2017 file photo, a third-grader punches in her student identification to pay for a meal at Gonzales Community School in Santa Fe, N.M. All students are offered the same lunch at Gonzales and other Santa Fe public schools to avoid any chance of embarrassing students whose parents may have fallen behind on meal payments. In April 2017, New Mexico became the first state to outlaw the shaming of children for any unpaid meals. (Photo: Morgan Lee, AP)

After a flood of angry Facebook comments and phone calls, a Rhode Island district last week abandoned its plan to serve cold sandwiches to students whose families owe money.

Such practices aren’t new, but they are facing more scrutiny. As the push against “lunch shaming” gains traction, here’s what you should know:

What happened in Rhode Island?

Previously, students in Warwick with unpaid charges were served cheese sandwiches that are not on the regular menu, which made it clear who owed money, Bonang said. The district was trying to make it less obvious by switching to sunflower butter and jelly sandwiches, since those are offered as a daily option to everyone, she said.

But the backlash prompted officials to go further and say all students would get the choice of a hot meal. A policy of not letting older students with unpaid meal charges take part in activities like dances and field trips was also recently scrapped, the district said.

How common is lunch shaming?

It’s difficult to gauge the prevalence among the nation’s thousands of schools. But in 2011, a majority of districts surveyed said they had unpaid meal charges, according to a study by the U.S. Department of Agriculture, which oversees the federal school lunch program. Among those schools, serving alternative meals was common. Cheese or peanut butter and jelly sandwiches were cited as alternatives.

Districts also reported taking other actions to recover costs, such as withholding grades.

Are there rules against lunch shaming?

New Mexico passed a law against it in 2017, and several other states including California, Iowa and Oregon have followed suit.

The laws generally prohibit practices like stamping students’ hands or making them do chores, though serving alternative meals isn’t always explicitly banned. The laws’ supporters say students should never go hungry at school or be shamed with food.

A child can feel shame even if it’s not obvious to others why they’re getting a cold sandwich, said Jennifer Ramo of New Mexico Appleseed, which advocates against the practice.

After forgetting to pay for lunches one week, Aniece Germain said her son was given a sun butter sandwich in kindergarten last year. She said her heart broke when she picked him up at school, and he asked why she hadn’t paid for him.

She was also charged $2.50 for the sandwich, the same as for a hot meal.

“So the purpose of that is to humiliate the kids, shame the kids, to get the parents to pay,” said Germain, who lives in Cranston, Rhode Island, not far from Warwick.

The national school lunch program serves around 30 million children. About 20 million of those students qualify for free lunches, and 2 million qualify for a reduced price lunch of 40 cents.

The roughly 8 million remaining pay the regular price determined by local districts. Students with unpaid meal charges are the ones affected by lunch shaming.

Why do families have unpaid charges?

Even if families with unpaid charges could afford to pay, many say children shouldn’t be punished for their failure to do so.

Reasons for unpaid charges can also vary. Some families may struggle to make ends meet, even if they’re not eligible for free or reduced-price lunches. Others may feel there’s a stigma to applying, or not realize they qualify.

In Warwick, the district said $12,000 of its $77,000 in unpaid charges is owed by children who qualified for free lunch, with charges incurred before their applications were approved.

The School Nutrition Association, which represents cafeteria operators and suppliers, said providing free lunches for all students would end confusion about charges.

Are unpaid charges a big problem?

The USDA report from a few years ago said lost revenue from unpaid meals tended to represent a tiny percentage of a school food program’s overall spending. But situations can vary, and the School Nutrition Association said unpaid charges are a widespread issue, with debt esca2lating in places that adopted anti-lunch shaming policies.

In Maine, officials estimate the state’s new law will have unknown but “significant “ costs for local districts.

In Cranston, where the debt is at about $90,000, officials in January started using a debt collector. Michael Crudale of Cranston Public Schools said simply getting a letter from a collection agency can sometimes get families to pay.

“They feel like it’s been turned up a notch,” he said.

He said credit scores aren’t affected, but that letters are sent every 30 days until the school year ends. At that point, Crudale said the district eats the cost and the debt is erased.