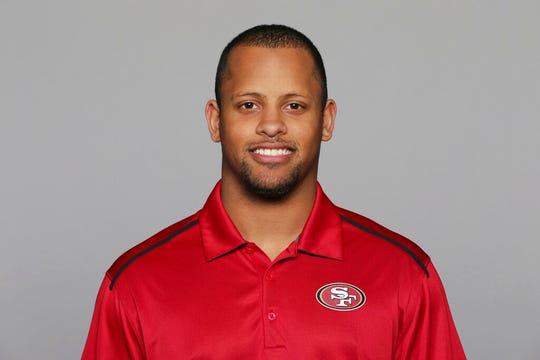 This 2016, file photo shows Keanon Lowe of the San Francisco 49ers NFL football team. Lowe, a former analyst for the 49ers and wide receiver at the University of Oregon, subdued a person with a gun who appeared on a Portland, Oregon high school campus Friday, May 17, 2019. (Photo: AP, File)

Portland, Ore. – Former University of Oregon football star Keanon Lowe said he had just entered a classroom at the Portland high school where he works as a coach and security guard when a student armed with a black shotgun appeared in the doorway.

Lowe had just seconds Friday to react. He lunged at the gunman and wrestled with him for the weapon as other students ran screaming out a back door, Lowe recalled in an interview with Good Morning America.

Lowe said he managed to get the gun away from the student and pass it to a teacher while Lowe held down the student with his other hand. Lowe wrapped the student in a bear hug until police arrived, he said.

No one was injured. Police are still trying to determine if any shots were fired.

“I lunged for the gun and we both had the gun, we had four hands on the gun,” Lowe recalled. “I’m just trying to make sure the end of the gun isn’t pointing toward where the students are running.”

Lowe, who is head football and track coach at Parkrose High School, said it was the “longest fraction of a second of my life, but I kind of assessed that situation and my instincts kicked in.”

This undated photo provided by the Portland, Ore., Police Bureau on Saturday, May 18, 2019 shows a rifle taken into evidence in the case against Angel Granados Dias, 18. (Photo: AP)

His first court appearance was set for Monday. No attorney was listed for him in online court documents.

Parkrose School District Superintendent Michael Lopes-Serrao said two students had previously informed a staff member of “concerning behavior” by Diaz before the incident. He said school security personnel were responding to those concerns and trying to locate Diaz when he arrived at the classroom.

A police report says the incident was a “suicide attempt with a gun” and someone added in bold handwriting “enhanced bail/suicidal.”

Diaz has declined an interview with authorities and has no prior convictions, according to court papers. He’s being held on $500,000 bail.

Lowe said he was called on a radio to go to a classroom in the fine arts building and get a student. When he got there, the substitute teacher told him the student wasn’t in class. Lowe was about to leave when Diaz entered the room.

Students gather outside Parkrose High School during a lockdown after a man armed with a gun was wrestled to the ground by a staff member, Friday, May 17, 2019 in Portland, Ore. (Photo: Dave Killen, AP)

“I feel like I was put in that room for a reason,” Lowe said. “He didn’t know I was in that room when he opened the door and I think there’s things in my life that have happened that have prepared me for that very moment.”

Lowe has not responded to messages from The Associated Press seeking comment.

Lowe was a star wide receiver at the University of Oregon, playing from 2011 to 2014. He caught 10 touchdown passes and had nearly 900 receiving yards.

Lowe began working at Parkrose last year as the football and track coach, according to his LinkedIn profile. Before that, he worked for his high school alma mater, Jesuit High, where he had earned state defensive player of the year as a defensive back and was a standout sprinter.